How to Build a Dungeon: Book of the Demon King - Reviews 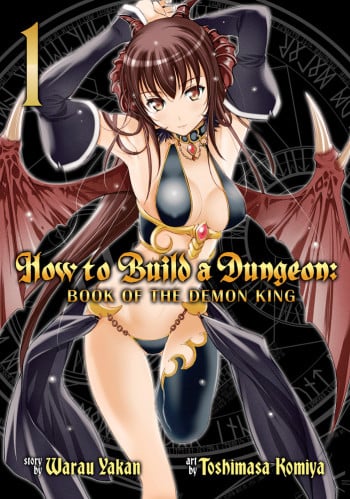 The characters were apparently developed by throwing a dart at a dartboard, they're that great, lol. The art is not bad, not great, there's nothing unique stylistically, but it's solidly drawn. The story started off ridiculously bad, this seventy year old man suddenly turns into a thirty year old, nothing was really offered by way of explanation, it just happens. Between the carefully timed sex scenes the story isn't bad actually. It's just so poorly fleshed out and the characters are so one dimensional that you can't possibly care about anything that happens to any of them. The plot could have been cool if it wasn't just used to fill pages between sex scenes. This was labeled 16+ so I figured there's bound to be some but it just feels like a story that can't decide if it's a porn or a fantasy, but it straddles the two worlds poorly. Pun not intended.

The final nail in the very sturdy coffin this volume now inhabits (actually I gave it back to the bookstore, for free, for reasons I'll detail now) was the final sex scene. I thought, mistakenly, that he'd allow the five year old girl not get railed by Aur, or at least come up with some sort of magical "hey look, she suddenly turned 18 (or any number over 15, for that matter). No, instead he bangs a five year old in a graphic scene for pedophiles. It was disgusting and the only time I've considered burning a book.

I'm writing this review just for the manga to have a good one. This manga is, actually, pretty much what the other people say it is, but it's not necessary that awful. I know that there are lots of people whiling to read and enjoy this kind of work, so give it a try and drop it just if is not for you after reading 3 chapters or something.

Seriously, I though this manga was a classic Fantasy/dungeon/rpg manga but no...

The main character is awful, he's a rapist and spend he's time to f*ck, and rape every girl he's seeing this is sooo akward and make me sick. Seriously what's wrong with this author??

Finally! This is how borderline-H dark fantasy should be.

The title says it all you get a dungeon building, demon-filled, dark fantasy epic that is really a lot of fun. Look, this manga isn't for the faint of heart or people who don't like borderline-H material. This series doesn't break any new ground, but it's one of the few out there that combines them so well, and unabashedly takes the explicit content to the max, stopping just short of treading into the hentai realm. If you are a fan of manga like Redo of Healer or Rising of the Shield Hero and you want a much darker, more explicit mature setting, you've found a perfect marriage of those themes. I'm not so blind as to think that this is the best story, art, or characters that I've seen, but it itches the degenerate itch that I have for this kind of setting and content. You know why you're here, you know what you're getting, and you know that you're not going to get something light and feel-good. This is far from that. This is for people looking to enjoy a gritty, action-filled, dark, fantasy world that has some sexy human (and monster girl) female characters that an OP heartless calculating MC gets to... enjoy.