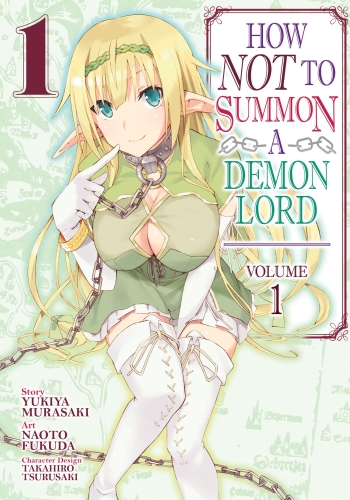 If you're looking for manga similar to How NOT to Summon a Demon Lord, you might like these titles.

Konoe Yuuto is a genius martial artist who is summoned to a different world where slave trading is legal. There, using his "Skill Taker" cheat ability, he steals the abilities of monsters he defeats, and starts building a slave harem while hoping to live a carefree life after retirement.

Both are ecchi manga taking place in RPG like universes with elves, demons, and beast-people. Both mcs build a mini harem of sorts over the course of each manga.

they are both some of the best Isekai manga i've read (i have literally read every isekai manga and am working on the light novels). they have good plot and great charater development.

Slime story may perhaps be a bit more interesting but lacks the eechi humor this manga has. If you like manga where people are in a strange world then its worth checking it out.

Kakeru Meguri is a second-year student at Minami Myojin Public High School who plays the character named Hellshaft in the VRMMORPG Exodia Exodus. One day a player suddenly appear in front of his eyes, which turn out to be his popular beauty classmate Ririko Asagiri. She believes that if they defeat the demon king they will be able to return to the real world, in fact Kakeru knows that if a player dies in the game, their consciousness will disappear in the real world. To save an important person, Kakeru possesses the most powerful awaken forbidden force, "Adult Mode".

What do you do when the MMO you’ve run for 15 years comes to an end? Akira Ono didn’t get much of a choice — he woke up trapped inside the world of his own game in the body of his in-game character: the Demon Lord. With an outcast child as his sidekick, he tries his best to survive the cruel fantasy world of his own creation, prosecution from the good guys, and of course, the final boss.

What do you do when the MMO you’ve run for 15 years comes to an end? Akira Ono didn’t get much of a choice — he woke up trapped inside the world of his own game in the body of his in-game character: the Demon Lord. With an outcast child as his sidekick, he tries his best to survive the cruel fantasy world of his own creation, prosecution from the good guys, and of course, the final boss.

Low in social standing in the school castle Doumeguri Kakeru, reincarnate into the strongest Demon Lord Hellshaft dominating the Virtual-Reality Game Exodia Exodus Furthermore, he obtained the “Forbidden Power” (Adult Mode). However, the players who appeared was none other than the girl he admires Asagiri Ririko who was also his classmate. Asagiri and the others believe that if they are to defeat the Demon Lord Hellshaft, they can return to their former world, but in fact, everyone’s lives would be in danger if the Demon Lord dies――!? And in order to save the people he treasures most, Doumeguri / Hellshaft attacks his classmates with his strongest ability!

The goddess Lista summons a hero who excels in every area to assist her. He's everything she expected him to be except for one, tiny thing: this anxious hero can't do anything unless he's absolutely sure nothing can go wrong!

After the Hero’s birth, Sacred, the youngest priest of the church is sent to take care of an abandoned chapel right across the Demon King’s Castle, for it to serve as a resting place in his quest. Thus, begins the relationship between a priest and the Demon Lord. Was the person with the right ability sent to the chapel or will their encounter bring forth chaos to the nation?

Sakimori Kagami plays a VRMMORPG called Arch Earth Online. He is a veteran player with the name and appearance similar to an elderly bearded wizard from a certain book about a ring. One day he purchases an appearance change item as a last resort to spend expiring currency and gets the idea of choosing what he would want to look like if his character was ever a girl. Falling asleep should have suspended the game, but Kagami wakes up still online and feels the game has has gotten a bit more realistic. Did Arch Earth Online finally get a long-awaited update?