How a Realist Hero Rebuilt the Kingdom (Light Novel) - Reviews 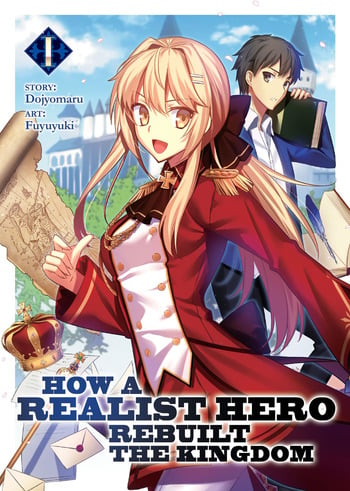 The Story begins with the summoning of a hero

Too bad this hero doesn't possess any notable powers

Story progress is pretty good and really interesting but then it goes full harem which is kinda annoying - don't know why the author thought this is necessary, maybe because it's a stable in isekai but for me it destroys a really good story at least partially

Even though it is still interesting to read how the protagonist at first rebuilds the kingdom and then creates a alliance to fight back the demon army.

I have really enjoyed this light novel series but I will be the first to admit, it's not for everyone. As a Military History major, I like the way the character uses his knowledge of history to gain the ability to make great changes to a Middle Ages vintage magic kingdom. The art is nice but is very limited with maybe only 1 picture per chapter. The story is great but may not appeal to a broader audience demanding action, sex and violence. It has most of that but is strictly rationed. I like it because I like history and it plays greatly into the "What if...?" kind of history that historians like to discuss over beers but never in academic circles. The characters are good and could be better if the writer wasn't so obviously constrained by a word count (probably necessary for the concept of a "light novel"). My biggest complaint about the series is the historical references used by the writer for his protagonist to draw on in lieu of experience. These references are exceedingly Japan-centric, maybe add in China. Okay, that is clearly who the writer is and his historical knowledge is clearly much more vast regarding Japan. However, he could easily appeal to a wider audience if he could expand his historical base to include perhaps Julius Ceasar, Shaka Zulu, Alexander the Great, King David, Sitting Bull, Napoleon Bonaparte, Horatio Nelson and George S. Patton, Jr. Few of his Japanese references are well understood outside of the Far East except by students of the Far East. I also don't care for the fact this novel series is openly a harem series but the writer flat out refuses to have any kind of physical relationship until maybe book 5 with any of his fiances. He exlplains it in a realistic manner in that he is afraid of infant mortality until he can upgrade the health care system. Okay, that explains refraining from sex but the lack of kissing or any other physical relationship when he paints a clear picture of an emotional relationship really seems not just odd and out of place but downright opposite to the stated mood. The lack of physical intimacy makes it feel like the writer has never had it and doesn't know how to write it, fearing that secret will be exposed if he actually tries. I really like the story series but I am concerned I might be in a minority.

I found nothing extraordinary and suprising. Even, some parts were boring. I can recommend to read it at spare time. Light novel version is ok. It is nothing more than 5/10