House of the Sun. 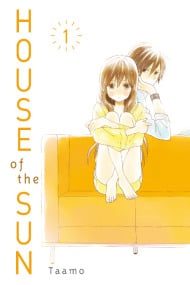 As a child, Mao spent all her time at Hiro’s house across the street. Going to his house always made her feel cheerful. A few years later, Mao’s father gets remarried and Mao finds herself with nowhere to call home. Hiro ends up letting her stay with him in the house he's been occupying alone since the death of his parents. A love story unfolds, between two childhood friends of different ages.

Taiyou no Ie is a beautiful manga that will make you cry tears of joy, tears of laughter, and plain old tears of sadness. It has great humor, adorable moments between characters, and tear-jerking encounters that will leave you waiting for more. The story is nothing too new- a highschool girl (Mao) moves in with an old childhood friend of hers- a guy, 8 years older than her, whom she has a crush on. She, of course, eventually confesses to him, and is rejected- but of course, throughout the manga, the subject of her affections (Hiro) finds that he doesn't want other guys approaching her cute self. . . There are love triangles, confessions, misunderstandings, love rivals, friendships made and friendships broken, secret identities. . . everything a shoujo manga is supposed to have.  That being said, this is my favorite shoujo manga- which is saying a lot (I've read a lot of shoujo manga). While I said the story is nothing too new, it does bring some surprises to the table. Its not completely predictable, which I've discovered is the case with many other shoujo manga. The romance is AMAZING. I shipped Mao and Hiro so much- they are pretty much my OTP. They are SO adorable. Every time there was a moment between the two (they are living together, after all) I fangirled so hard. Their relationship developed a lot, until there came a point where one realizes how much they need each other. Mao gives Hiro the motivation to get his family back together, and Hiro gives Mao the courage to try to mend her relationship with her father- and, of course, he's there to comfort her when her dad acts like an ass and Mao is hurt. Hiro and Mao are pillars of emotional support for each other, even through the awkward/bad moments during their relationship. When it came to the love rivals (rivals of Hiro, for Mao) there were only two, which relieved me. Love rivals are so overused in many shoujo manga, but here that isn't the case. And even then, one of the rivals ends up with. . . well, I won't give it away ;) I liked how those love triangles were resolved. The art was beautiful. I love Mao's character design. In the manga, she is described as a beautiful young woman, and I could definately see that. All the characters actually looked their ages! Hiro- is just hot. I love him. The rest of the character designs were great as well- but Mao and Hiro stood out the most (being the MC's, of course). I've talked a lot about Hiro and Mao- they developed a lot as characters (Hiro worked on getting his family together and realizes how much he loves Mao, and Mao gets the courage to resolve her problems on her own, and works to get along with her dad, stepmom and stepsister). There were a couple chapters focused on each of the other characters- Sugimoto getting over her first love, Oda and Chihiro's relationship, even Hina with her adoptive family. I felt like all the charcters were fleshed out enough, and everyone went through a certain amount of development (mainly Mao, Hiro, Hina, and Mao's dad). Overall, Taiyou no Ie is an amazing romance slice of life manga. You should DEFINATELY read it. The ending is just PERFECT- I wanted more, but just because I didn't want it to end. I felt completely satisfied at the end. The conclusion to the romance left me with little sparkly feelings inside. I could go on and on about other components of the manga, mainly surrounding Mao- Mao with her weird historical fascinations, Mao with her book, Mao and her relationship with Sugimoto, Mao and Daiki's relationship- I could even write a whole essay on Mao's family issues. But this is long enough already, so I'm done.

Sweet. This romance is sweet, adorable and any other word you can think of that fits in that catergory. I you want a feel good, mushy, emotional read go for it. If you do not like that stay away. The characters tug at the heart strings. Love, pure and simple.

I read this entire thing in one sitting. It's absolutely adorable.  Neither of the main characters grew up in a perfect family, but together they can overcome their issues. It's written very well and the relationship is just cute. I honestly don't hate any character except for like- one. I can understand every single point of view. That's how you should write characters. Even if they aren't the best, make them understandable. And that's what the author did