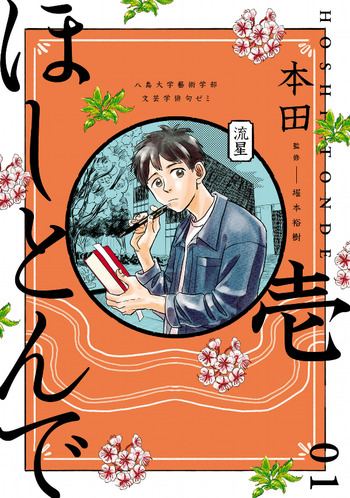 About a novelist and his daughter, Chise-chan, an elementary school girl in Tokyo. Because Chise's mama died when she was very young, her papa takes care of her. She loves papa so much that she carries papa's photo at a magazine interview instead of the idol stars' photos, and she's very happy that her papa's working at home because she can be with papa almost all the day...

The Writer's Hand: Life with My Housekeeper

Ikumi Nakamura is an up-and-coming writer with a bright future ahead... or she was two years ago. Now she's desperately trying to write her next book. She needs to prove herself after the short stories she had written since her award-winning novel flopped. The only person who still seems to have faith in her is her editor who decides he's going to help by sending his friend Renji Uenozaka to play housekeeper for Ikumi. Ikumi won't have it, though. She's a strong independent woman, and she can do this on her own! Or, so she thinks...

After losing her parents at a young age, Uiko comes to find solace in exchanging letters every Christmas with a picture book author known only by the pseudonym “Kuma-san”. 10 years later, unable to pay her university’s tuition fees and on the brink of having to drop out, she comes in contact with a popular novelist named Fujimiya Hiiro, and now works as his assistant to save up enough money. What does the future have in store for her?

Veteran novelist Mariko Koda lives with the families of both her son and her grandson in one house. Feeling like she no longer has any place in her home, she decides to leave the house and strike out on her own, beginning with living in a manga cafe in the city.

Yuu Sasaya is a naïve, unfashionable girl from a small town and is living in Tokyo for college. She becomes fascinated by the theater after watching a play for the first time and declares that she will become an actor. Yuu manages to join a small theater troupe, but due to her lack of skills and experience she is only allowed to handle odd jobs. Her first chance to perform comes when she is given a small guest part in a play with another troupe. However, when Yuu makes a critical mistake, she is forced to face the harsh reality that even with determination she cannot become an actor without talent. She considers abandoning her theatrical dreams, but with some encouragement, she decides to change her goals and become a writer and director. Yuu must now find her own unique voice and showcase it for everyone to see while overcoming the many difficulties that lay ahead.

Famous Japanese novelist Osamu Dazai, author of No Longer Human, is reincarnated into modern Japan with his scathing sarcasm and dry wit toward humanity intact.

Cath doesn’t need friends IRL. She has her twin sister, Wren, and she’s a popular fanfic writer in the Simon Snow community with thousands of fans online. But now that she’s in college, Cath is completely outside of her comfort zone. There are suddenly all these new people in her life. She’s got a surly roommate with a charming boyfriend, a writing professor who thinks fanfiction is the end of the civilized world, a handsome new writing partner… And she’s barely heard from Wren all semester!

The Poet Who Buys Words

As punishment for plagiarizing another man's work, a young poet is cursed by his king's magician. Now he must travel the land writing poems using words purchased from others, and if he fails to do so, his body will become twisted and he will eventually lose the ability to walk. But any word sold to him the seller loses the ability to speak - forever!