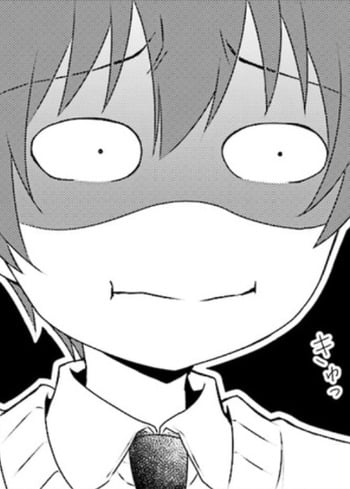 If you're looking for manga similar to Hoshiko Tenmonbu wa Buchou ga Mikakunin, you might like these titles.

10 years ago, a mushroom-shaped alien spaceship landed on Earth, but the media began to lose interest in it as time went on and nothing exciting happened. Now, a change is coming. Tetsu is a student at the nearby high school, where he is one of the members of a science club that is in danger of being abolished. The club president, who he likes, is an active girl named Aoi. When an alien creature appears at their school, she convinces the club to sneak in after hours to have a peek at it. After she has a particularly close encounter with the alien, she begins to suffer from fever, memory loss, and the growth of an alien tail. An infectious disease agency comes to take her into custody, and it looks like hers is not the only case.

Yukinari was abandoned as an infant, but fortunately a loving family adopted him. Perhaps because of this, he has an affinity for helpless, abandoned creatures and goes out of his way to help them. One night, Yukinari and his friends witness a falling star hit the ground and rush to the spot where it hit, only to find a child cradled in the meteorite, surrounded by a field of roses?!

Hoshino Shiho is known in school as a major delinquent, and there are even three students who repeatedly ask her to be a part of her 'gang.' While Shiho does talk pretty rough, and she does beat up bullies when they're in her way, she really doesn't think of herself as a delinquent. One night, in her family's hot spring inn, a spaceship crashes into the bath house. The alien from inside, "Dejiraoki Seco Omega," claims he has come to conquer and destroy Earth, as he has destroyed many planets before it. Luckily for Shiho, another alien soon shows up, who manages to leash Omega to a video-game-like controller. Finding herself in possession of this controller, Shiho promptly uses it to force him to take responsibility for the mess he's made of the bath house. Now Shiho has an angry alien under her control, but who knows what else is out there to threaten the Earth?

Kurosaka Gengo is just your normal highschool boy, who likes to skip cleaning duty. However, Gengo's peaceful life ends when he comes across a strange man. That man claims to be an alien and is in need of Gengo's body to survive on earth. Not only does Gengo deal with the alien, but with others that are after him!