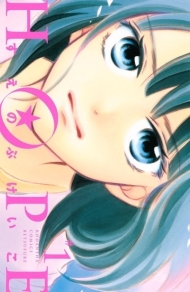 323 users are tracking this. Log in to see stats.

I first picked up Hope thinking it was some fluffy shoujo story about a girl chasing her dreams, but boy was I wrong. This manga can get really intense, so be prepared... Hope follows a girl's dream to become a mangaka. However on her journey to becoming a pro, she encounters every single obstacle that could ever possibly come through her way, but she overcomes them all.  Story: One thing this manga does really well is keep the plot interesting. There is never a dull moment, new conflicts are constantly arriving without reprieve. Every now and then, I wished the manga would slow down a little so the main character could celebrate her victories, but with only 21 chapters, I can understand why the mangaka didn't want to take the plot slowly. One downfall in Hope is the romance. This part has some spoilers, but I'll try to be as general as possible. The main character falls in love, but gets her heart broken due to a simple misunderstanding. The purpose of this was so she could express love and pain more realistically in her work, and in that way, the romance worked to further the plot along. However, the love interest was quite influential in the first half of the manga, but once the misunderstanding occurs, that's the last we see of him. Since love is not the main focus of this manga, I understand why the mangaka didn't want much development, but as a reader, I wanted the protaganist to make amends with her love interest. He was a really close friend of her's, and one of her only allies, and suddenly disappearing that way in the plot was kind of sad, especially considering how the main character has almost no one on her side.  On that note, another thing I wish I could see more of in the manga is reoccuring characters. Once a character does their part to encourage/ disencourage the main character, they are gone. Due to this, the manga feels kind of partioned, as if each stage of her journey is a seperate story. I wish there was just a bit more flashbacks or something to tie the story together. Now as I was saying before, this manga is not afraid to get dark. Some really crappy things happen to the main character, that really spice up this plot. The drama is constantly there, and at times it seems like a bit too much, but I rather have it this way then read a slow story. Art: The art is pretty normal for a shoujo manga, no super distinguishing features like super pointy chins or pencil thin eyebrows. When it needs to, however, the art can resemble something from a horror manga, with creepy delirious smiles and faces of absolute anger. However, the art of the main character in the story is quite unique, and the way she portrays emotions is quite interesting to see. Characters: The main character is great. Her main strong point is how badly she wants to be a mangaka, as that is what carries her through all her adversities and allows her to perservere to no end. One other thing I like is she tends not to make a mess of herself. Like when she gets embarrassed or when something bad happens to her, it usually is not because she was being an idiot, but because all odds are agianst her. She also undergoes quite a lot of character development. The rival. Oh. My. God. I cannot tell you how many times I wanted this bitch to burn. She is the worst clever, manipulative, pathetic loser ever. UGJHDJSKGH I HATE HER SOOO MUCH!!! And believe me, you will too. So at first, she doesn't seem to bad, just mischevious and jealous. But she undergoes the most character development; leveling up in bitchiness. She just gets worse and worse and makes the main character suffer through so much. So a great villian, well developed. One thing I wish I could see more of is her motivation to become a mangaka, and why she is so set on doing whatever it takes. The story says something about her wanting to be an idol at the same time, which made me wonder why she chose to focus on the less flashier route of a mangaka, as it seems like all she desires is fame which she would get more easily by entering show business. Towards the end, it kind of hinted that she is psychotic, but I wanted to see some more of an explanation. The love interest/ childhood friend. He's a pretty ordinary character, nothing stands out too much about him. Probably one of the weaker characters, but he does his job. The editor. Also a bit of a weaker character, as he plays the sterotypical role of strict motivator. However, he becomes crucial after the love interest is out of the way because he becomes the main character's sole ally. There are hints of romance, but it's not developed at all. One thing I wished to see was a more sympathetic side to him. The protaganist goes through some of the worst experiences ever, and with him being her sole ally, I wanted to see him take care of her a bit more.  Aaand that's all I've got to say! Hope this helped, and thanks for reading :).