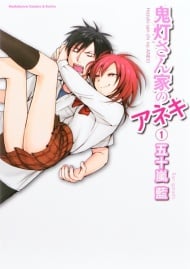 Gorou has a crush on his older stepsister Haru. Unfortunately for Gorou, Haru happens to love teasing him sadistically in every way possible. This is a 4-koma crack comedy about their wacky day to day life and interactions.

Why is this funny? Is it just because Haru's reactions are different from how a normal person would react? Fe acts with an abusive level of immodesty. A lot of the comic strips end with Gorou getting injured or at least getting highly stressed. On top of the teasing about sexuality fe also brings in random creepy things, because Gorou has an aversion to horror. Most of feir actions seem motivated to cause Gorou as much pain as possible, to get the strongest reaction out of fem as possible. In chapter 21 and other places, the manga tries to act as though this behavior of feirs comes from a place of concern, but that's just bullshit. Feir actions are cruel and sadistic to the point of being inhuman. Gorou has an obsession with feir step-sister Haru, an obsession which fe is aware of and takes advantage of to bully fem. Gorou is jealous of Haru potentially interacting with any other boys, and since fe mistakenly believes that Kyou is a boy, fe gets distressed whenever Haru spends time with Kyou. Haru also seems jealous of Gorou potentially interacting with any other girls, so fe tries to make fem come across as gross and unappealing to the girls in feir class and, more specifically, feels threatened by feir comfortability with Mizuno. Gorou does find Mizuno attractive, but Mizuno just wants to be friends. Misaki stalks Gorou and tries to drug and rape fem several times. Meiko gets annoyed at Haru and Gorou's (abusive) flirting, and likes to provoke drama to alleviate feir boredom. Kaede is Gorou's blood-related older sister; fe dislikes Haru, but doesn't try to stop the abusive and creepy dynamic between Gorou and Haru. Kousuke and Mei are a brother and sister who are briefly introduced as though they would become recurring characters, but ended up not being very relevant at all.

Alternating between 4-Koma and the normal... non-4-Koma format, Hozuki-san Chi no Aneki is about a brother, Gorou, who lives with his sister, Haru, (Not related by blood; step siblings?), and has a sister complex. A huge sister complex. BIG. It's what drives most of the jokes, concerning him at least, and how the sister trolls him about it; with him ending up in compromising positions infront of his classmates and peers; him trying to prove his worth and manliness, the usual stuff. It has the requirements for a comedy about a brother/sister duo and it works. The short volume series does work in it's favor as it doesn't overstay it's welcome but on the other hand, those left wanting for more (Me), are only left with what little there is. Aside from the comedy, it tackles drama and friendship, more prominent in the latter half of the series. It does it well and even makes it twistedly comedic in it's glory while maintaining an aura of seriousness. Dramedy, if you will. More often than not, it's whenever it's in the regular format so if it changes, you know some serious things will be going down. Relatively serious at least. The side characters add to it by revolving around one or both of the mains. Be they siblings, friends, stalkers, saviors, take your pick. As the more often seen style of 4-Koma declares, they aren't meant to be deep, excluding the mains. They, on the other hand, have more depth than one would suspect and, once again, in it's favor. The sum of it's parts are comedy first and foremost, with a brother complex as the brunt of most of the jokes, perversion as a high secondary, and serious drama a somewhat distant last. It may get tiring to those who might not like jokes revolving around the same topic but that topic is the main plot point; what the manga revolves around. But then again, it's a 4-Koma and from my initial belief and inexperience with them, that's how a good number of them should be.* It was fun while it lasted, and a worthwhile read while it lasts. *Horribly unconcrete. 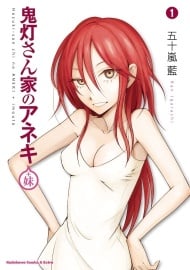