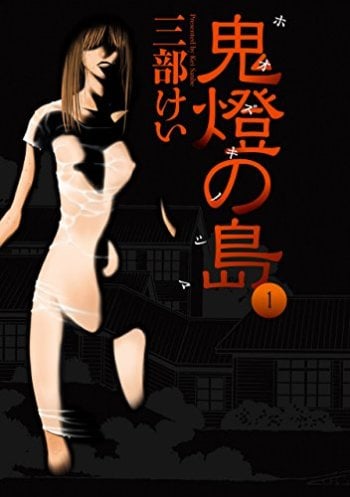 Having been abandoned by their mother, ten-year-old Kokoro and his blind little sister Yume have traveled to Hohzuki Island to start a new life. There, they join four teachers and four other students at a special school with few amenities; but soon, the pair discovers that something is terribly wrong. At least one student is missing and presumed dead, the teachers are hiding secrets from them, and none of them know if they'll ever manage to escape alive...

When I go for a horror manga that deals with survival, I expect:1. Suspense2. A satisfying conclusion3. Violence and blood (Optional but appreciated, not a dealbreaker)I for one, am a sucker for suspense. If there's an inkling of it, I'm in and am probably all caught up in it while others are shaking their heads. This has done it for me in the suspense department and it had enough to make me want to continue on in one sitting. You got your mystery to go along with it; the disappearances, the lack of trust and a sense of something deeper. There's always a reason for everything and it explains it all. I may not agree or like all the explanations or answers, but at least it leaves no stone unturned. And while I may not like how all the events turn out, it still does them well enough overall.It has it's share of blood; not overly detailed in it's gore but it's there for effect. Some violence is there to add some spice to it and it works some magic for the survival on an island theme. To go with your blood and suspense, is some fan-service with the buxom health/phys-ed teacher Yukino. Some nudity here and there, shower scenes, the ocean and more fan-service, though some is in the "your milage may vary" category. One never gives away details of the ending so I'll say that it didn't work for me. If it were more grim, more like the setting, then sure, I would have liked it and rated it higher. Even without a satisfying conclusion, I still had a good time. There is better fare in this genre and setting but fast readers can blaze through the four volumes before the night ends.

Hohzuki Island is a relatively short manga by Kei Sanbe, the guy who also wrote Boku dake ga Inai Machi - which just got an anime this season, but I haven't tried it yet - and Cradle of Monsters, a mediocre zombie-manga about kids trying to survive on a boat. And well, there's some consistency there, because Hohzuki Island is a mediocre survival/horror/mystery manga too. First off, I have to say that for the most part the building of suspense was well done. The adults are suspicious, there are mysterious disappearances, a ghost roaming around, and an interesting conflict where you feel like anyone could die at any given moment. It makes you want to finish the manga in one go (which is possible since it's only 4 volumes). Having the perspective of the kids is also crucial here, and is important for the ending too. Another good point is that there are few questions left unanswered. Shorter series often gloss over certain key points in the plot, but here everything is explained. Although some explanations were complete bollocks, we got something to say the least. But then we get to the ending, which was even worse than the classic "it was all just a dream". A ton of reveals are handled really badly before all this, but at the ending we get the biggest mess. Things that were explicitly shown before are just ignored, a ton of impossible things happen, and it was completely ruined by a certain overused deus ex machina. It also didn't fit with the tone the story had before it, and felt rushed. For mysteries the most important thing is the ending imo, so I gave the story a low score overall even though the suspense was good. When taking a look at the characters, I can only be very disappointed. They're all so one-dimensional it isn't even funny. What do we know about them? The teachers: one is evil, one is semi-evil, another is an evil pervert, the fourth we know nothing about. The kids: one likes eating, one is blind, one is smart, one is mute, and one is the main character.  Defining charactes with one trait like this is lazy imo. Adding a "super-intelligent" kid to the bunch is only a recipe for lazy storytelling ("I just know because I'm smart").  The artstyle is nice enough, yet there is one thing I have a huge problem with: Yukino, the female teacher. Her hip-to-waist ratio varies from 1.5 to 2.0. So first off: decide on one ratio, and secondly: make it a ratio that's actually possible.  Also, there's an abundance of tits and asses. Not necessarily a bad thing, but not for everyone's tastes so be warned. Overall: the concept is solid, and there's enough suspense to keep most people invested. However, weak characterization and a bad ending make this manga go on the long list of mediocre and forgettable works.