Alt title: The Way to Absolute Dungeon Administration ? There Is No Reason To Meet With the Opponent! 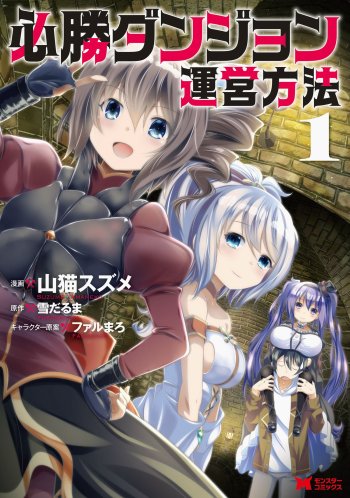 Way too many characters. Makes the story utterly incomprehensible and difficult to follow.

Most of the art has an interesting quirky, bobble-head appeal. It looks airy and light, but sometimes this results in having shading without clear outlines and backgrounds which look smudgy. Many characters often look better when drawn with less detail. Like the goblins, for example, which look absolutely adorable in their sketchiest, chibi-est form, but look grating when drawn full on. Speaking of the goblins, I appreciate how they don't conform to the cliche goblin look, but instead have a frill on the back of their heads and no nose. On the other hand, the slimes look dumpy every time they're drawn.

When I first saw Torino Kazuya's (a.k.a. Yuki's) eyes, I found them disconcerting and wondered if all the eyes would be drawn just as awkwardly. But soon I saw Elzu's eyes and, thinking fe was cute, I felt a ray of hope. I saw more and more girls with similar cute eyes--Oriel, Seraria, Lurua, and so on and so forth. But it wasn't long until I realized it's not that the author is able to draw cute characters, it's that the author is able to draw one cute character multiple times. Sure, all these girls are cute, but that's because they all have the same face--only their hair styles are different.

Though I suppose I shouldn't be too surprised at the author being economical with distinctiveness considering how exponentially quickly new characters get introduced. This is a story about a dungeon master who wants to convert feir dungeon into a city. It involves a lot of expansion and city planning and pompous monologues about social theory. And who doesn't love a good pompous monologue?

This is a Poorly written Mess,

Too many Characters are introduced into the story way too fast by chapter we had already had about 11 main characters non of which were particularly uninteresting.

The Main Character is the worst he seems to be a fairly intelligence person able to predict things in advance but still led a useless Liv back in Japan. His motivation aren't based in Logic despite the story attempt to make him look smart but a childish goal of non-confrontation. The actions choose to reach this are so smart and confusing they come full circle and become dumb and unnecessary complex.

Due to that it makes the story a chore to read as it difficult to follow and the story incomprehensible.