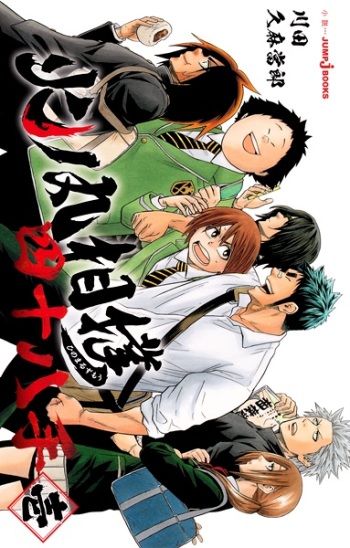 If you're looking for anime similar to Hinomaru Sumo: Shijuuhatte (Light Novel), you might like these titles.

Kinnikuman has proven himself worthy to be crowned the next king of Planet Kinniku. But at the ceremony, five other Kinnikuman's arrive, all claiming to be the true prince of Planet Kinniku. Now, a Royal Survivor Tournament is being held to decide the true successor to the throne, and with the help and support of his friends and with his recently acquired knowledge of the Ultimate Technique (The Muscle Spark), Kinnikuman fights for what is rightfully his.

Yawara helps a group of timid grade school kids overcome their fears and compete in a judo competition. One of the kids is Hanazono's cousin, which is how she meets them. Another is a girl who seems very similar to Yawara.

Sanshiro Kurenai, heir of a judo dojo, arrives too late to prevent his father’s death at the hands of a mysterious martial artist. The only clue the killer left behind? A glass eye that will no doubt unlock the identity of his father’s murderer.

An arrogant karate master named Tadashi Sawamura enters the kickboxing ring to prove his superiority, only to be beaten into a coma by a practictioner of the new art. After recovering, his trainer Endo convinced Sawamura to study kickboxing in order to regain his honor.

The arc is portrayed in the Baki manga, the second installment in the series, and features underground ring fighters in the no-rules combat environment of death row convicts. The anime will highlight five individuals from prisons around the world who "long to know defeat." The five individuals break out of their respective prisons and head to Japan.