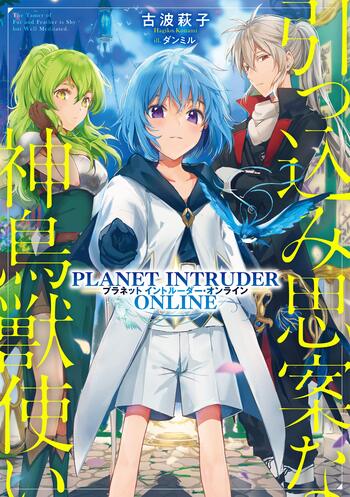 If you're looking for anime similar to Hikkomijian na Shinchoujuu Tsukai: Planet Intruder Online (Light Novel), you might like these titles.

Second-year high school student Rakuro Hizutome loves nothing more than finding so-called "trash games" and beating the crap out of them. When he decides to change things up by playing a new, "god-tier" VR game known as Shangri-La Frontier (a.k.a. SLF), he does what he does best: min-maxes, skips the prologue, and jumps straight into action! Rakuro may be a seasoned gamer, but a meeting with an old rival will change the fate of every SLF player forever. Clad in nothing but shorts and a bird mask, Rakuro (player name: Sunraku) launches into the world of SLF. Things are going well at first as he takes down a goblin, a bunny, and even a python. But then Sunraku comes up against a huge, hard-hitting wolf known as Lycagon the Nightslayer. Will Sunraku's years of "trash game" experience be enough, or is he about to suffer a rude awakening just a few hours into his SLF adventure?

Takashi Katori is a big fan of online games, and so is his American friend Sarah. However, one of their RPGs goes too far, as their virtual world and the Lezarion robot that Takashi created for the game somehow mix with reality. Takashi is caught, but later the Earth Governement discovers that an evil scientist from the Moon (now a sort of abandoned colony with restricted access) is hacking into virtual worlds and security, so they force Takashi to pilot the Lezarion and, with Sarah's help, fight evil and protect the Earth.

Having finally reached the seventh floor, Hakuno clings to the hope that he can somehow fix this defective war. But time is running out.

The third season of Yuan Long.