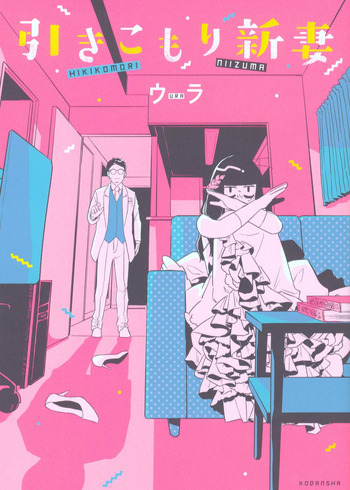 "Marriage" when two who were once unrelated vow to love each other and wish for each other's happiness become "family." This marks the start of the married life of her dreams. Or so she thought. Before she knew it, she became a shut-in!? What will the newlywed wife do!?

"This is the story of how I got married… and became a shut-in." The purpose of this manga is not to entertain people. Yes, there were funny moments but overall it is to show how dark life can get. It’s about feeling isolated, depressed and pressured. It’s about trying to do and be what society expects you to do and be but failing because of the pressure that comes along with it. It’s also about the pressure you put on yourself because you want to reach the norms that are present in society, and how devastating it is when you can’t reach those norms. Ura-san is a thirty years old newlywed who moved to another town to get married with her long distance boyfriend of six years. Ura-san and Tsuna-san met in college and started dating after starting of as friends. Though, I felt like they just got together because it was convenient for both of them. Ura-san has an extreme low self-esteem and Tsuna-san doesn’t get very emotional. I think both of them just started dating, stayed in a long distance relationship and married afterwards due to society's standards. I'm probably wrong but Ura-san gave me asexual-vibes. Maybe both of them did, or maybe they just didn’t love each other deeply yet. I believe that they care about each other but I think that the main reason why they stayed together and eventually got married is because it was the social acceptable thing to do. Before they got married, Ura-san was happy. She loved her job, loved spending time with her friends and loved the town she lived in. When they got married, there was no other option than her moving to her husband’s hometown because that’s what he wanted. Because of that, Ura-san “lost” everything that made her happy. She was very enthusiastic at first but everything spiraled down after that. The pressure of finding a new job, being a good wife, and the stress caused by the new environment got to her. She started to struggle with falling asleep and doing daily tasks, and her mental and physical health went downhill. It was really sad to see her spiral down like that. What made it even more sad, is that you knew that it was going to happen. You could feel that she was pressuring herself about and into so many things. Then the couple finally started to talk to each other. Ura-san is used to bottling everything up but Tsuna-san finally gets her to open up about her feelings. That’s the first time I felt the love between these two people, and that they’re not just together because it’s convenient. During that talk, Ura-san finally started to realize that there’s no need to feel so much pressure about getting a new job. Tsuna-san even told her that she could do something like becoming a mangaka. I also loved the fact that towards the end, we get to know some of Tsuna-san’s thoughs too. Most of the time, I felt like he was kind of indifferent towards the situation but due to getting to know his thoughts, you start to realize that he just didn’t know how to show his feelings. He cares. I do believe that he loves Ura-san and that Ura-san loves him. It’s just that society makes us believe that the time after getting married should be/is the happiest moment of your life. It’s not always like that, and that’s okay. That’s the messages that this manga wants to deliver. For those who have noticed, the name of the author is Ura-san and that’s also the name of our female character. Yes, indeed, these are one and the same person. This manga is an auto-biographic story about Ura-san her relationship and marriage. Her message is that no matter how much you love your partner, that things aren't always sunshine and rainbows. "To all the new wives who’ve changed careers or stopped working and left their hometowns to accommodate their partner, and who are in despair over having to live in a completely foreign land to which they are only connected by their spouse, and who are negative and overly humble like me..." Author Ura-san has a clear message for them, which is that it’s important to relax and to talk to their spouse about how they feel. She also has a messages for the other party, the persons which partner followed them to wherever they were, which is to not give up. But she also has a messages for newlywed/married couples, which is to communicate with each other in order to work things out. This story is not to entertain people but to show the harsh truth about reality. Even though, I’m nowhere near thirty or married, I loved this and could relate to some certain things. I especially loved the ending. When I first came across this manga, I fell in love with the cover. During and after reading, I fell in love with the art, the couple, and with Ura-san and Tsuna-san. I didn’t read this in one go because the atmosphere was rather heavy overall, so I recommend not pushing through when things are starting to feel heavy. Pushing through will possibly make you miss the point of the entire manga. I wish Ura-san and Tsuna-san the best!

Well this manga certainly hit home since it's a lonely stressful time for everyone during a pandemic! Basically it's a true story of a woman who quits her job, moves to another prefecture and marries her long distanced bf. I have to say, the guy is pretty laid back like he was so understanding of Ura that she's finding it tough to get a job and that she is struggling with her mental health. You could say hes a pretty laid back dude but is straight forward with Ura to open up. I like the fact the author didn't try to sugarcoat the idea of being a "shut in" because it is a struggle to know you're unemployed and the fact it seems the Japanese workforce is chaotic with the long work hours.  Yeah guys if you really want to read a "straightforward true story without your usual cliques" then I highly recommend taking a read at this pretty decent manga!

This manga is an autobiographic story about the mangaka and how she struggled with being depressed after getting married. It's a nice story and the art is pretty cute, read it if you want some sad yet wholesome manga. The mangaka's twitter is @uuuuuraaaaa2, in case you'd like to follow her, she posts art in there!:D