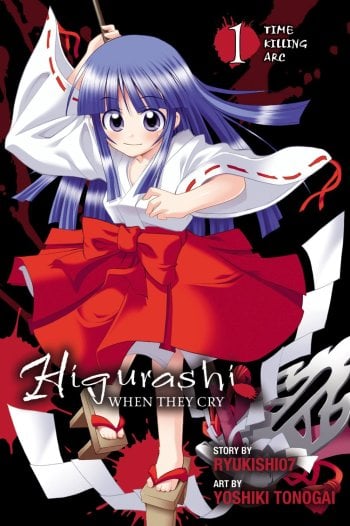 The last volume of the original manga series. As usual my review concerns the question arc, and not the answer arc, as that would contain too many spoilers. I can say though, that the answers are satisfying.

The town of Hinamizawa is protesting against the government who wants to build a dam right on the town's location. This has led to several acts of violence, and now the grandson of a minister supporting the dam project has been kidnapped.

The police Akasaka is sent to Hinamizawa to investigate whether or not the town is responsible. There he meets the mysterious Rika who tries to convince him to go back to his pregnant wife in Tokyo. He ignores her warning...

In this volume we are introduced to other members of the Sonozaki family, such as Mion's grandmother who basically controls the entire village.

The artwork was good, but this manga artist screwed up the character designs. Especially Rika looked awful in this volume, which was kind of sad.

The question arcs of the Higurashi series have been incredibly interesting, and the answer arcs have provided us with much needed answers. However, there are still plenty of mysterious parts of Hinamizawa revealed, and that's why the series continues.

I will come back with some reviews of later volumes, but I don't know when that may happen. Manga is kind of expensive where I live.

Anyways, here are my grades:

Also, I give the entire series an overall grade of 9. I strongly recommend it!