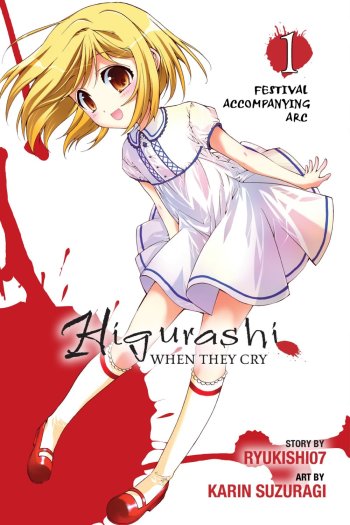 If you're looking for manga similar to Higurashi When They Cry: Festival Accompanying Arc, you might like these titles.

The time for logical debate and magical feints has come to an end; the revelation of the truth about Beatrice the Golden Witch is at hand. To facilitate this, game master Bernkastel has chosen Will Wright the Mage-Hunter to step onto her board and answer a single question: Who killed Beatrice? Joining him in the game is Lion Ushiromiya, Krauss's firstborn and heir, whose role is a mystery in its own right. Will's line of questioning draws together the stray strands from all the previous games, twisting them into a thread of truth, revisiting Kinzou's first encounter with the young Beatrice and working through the legends that have since sprung up around her...

Time holds little meaning for Beatrice the Millennial Witch. Replaying the events leading up to the Golden Banquet again and again only gives her more opportunity to play with her new favorite toy, Battler Ushiromiya. The boy's will to resist the witch remains strong as the curtain rises for a third time on the Ushiromiya family's annual reunion. But as Beatrice pulls more and more players into the game, the strain on Battler's defenses is evident. Do the other members of his family hold the key to solving the witch's riddle and sealing her defeat?!

Umineko WHEN THEY CRY Episode 5: End of the Golden Witch

Beatrice is dead, her soul shattered by Battler at her own request. Though her body sits across the chessboard, she is no more than a husk of the laughing, impulsive witch she once was. Lambdadelta is more than happy to preside over the fifth game, and Bernkastel willingly steps in for Battler as he takes his leave to collect his thoughts. But two witches can cause all manner of mischief when left to their own devices, especially when they care as little for rules as Lambdadelta...

Umineko WHEN THEY CRY Episode 4: Alliance of the Golden Witch

Twelve years after her loved ones were brutally murdered at the annual family meeting, Ange Ushiromiya, now eighteen, is the sole heir of the Ushiromiya family. Ostracized by her peers, Ange seeks companionship in the pages of a diary left behind by her cousin, Maria. The diary offers a precious glimpse of Maria's world - her struggles at school, her friendship with stuffed lion Sakutarou, and her fascination with magic. It's as if the diary contains the last remnants of Ange's dear cousin...and an opportunity for Ange to discover the magic within herself...

Umineko WHEN THEY CRY Episode 6: Dawn of the Golden Witch

Battler assumes control of the sixth game, wielding his new golden truth as he parries the logical blows of the detective-and-witch, Erika Furudo. For Battler, what began as a contest over the existence of magic has become a fight to revive the fiery, vibrant Beatrice of his early clashes on the game board. The logical loops and rules of the game were already complex, but now as the game master, Battler must quickly learn how to shape the events to his and Beatrice's ultimate ends without getting locked in a closed room by Erika, the Witch of Truth!

Umineko WHEN THEY CRY Episode 1: Legend of the Golden Witch

In the year 1986, eighteen members of the Ushiromiya family head to Rokken Island where Kinzo, the elderly head of the household, will soon choose one of them as his successor. A portrait of the Golden Witch Beatrice greets them as they arrive at the family mansion, along with a disturbing epitaph: she will be resurrected on the ninth twilight after a number of bloody sacrifices. Unfortunately for the group, the statements come true, and soon the carnage begins...