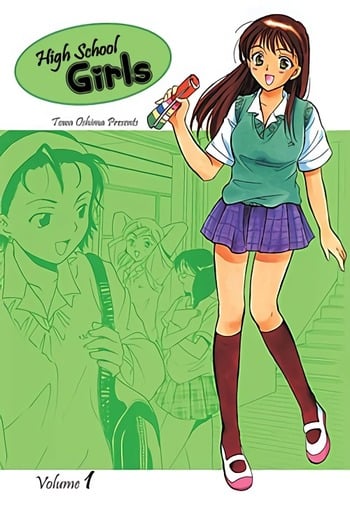 Story: This manga doesn't really have much of an interesting story to it, its just 6 girls at High school telling their stories to the population. The majority of the jokes are period or sex related- its cheap, its simple, its been done countless times before, but nonetheless I still really, really enjoyed this and found I was pleasantly suprised, this has to be one of my top manga's ever. Its great.

A good thing about it was, unlike anime like Momoiro Sisters or Futari Ecchi the period puns and explicit nudity didn't seem blatant ecchi just for the pleasure of the male readers; in High School Girls the nudity didn't seem driven towards any men or perverts at all, it just seemed natural and adds to the humour of the story.

Art: The art in this manga is pretty good, it can be a little sloppy- but its one of the best for slice-of-life mangas. There aren't many chibi's used in this particular series though- which is something I missd when reading this :(

Characters:  Sadly the characters in this aren't really that passion-infusing, if that makes sense. What I mean to say is, you aren't really influenced to either love or hate them. You don't really learn tp sympathise with them, or laugh with them. Their kind of just their to watch and pass your time by with. I''m not sure if this was because there was simply no character development or anything, but all the characters I just didn't find myself getting attached to at all, with only one exception of Eriko- and even her I only slightly liked.

Overall: As far as manga's like this go, this is actually really good. I'd definitely recommend it as its a fresh take on typical storylines like this. :)