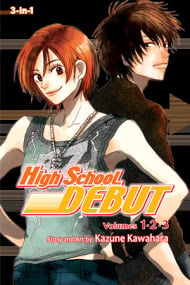 Haruna has never been feminine; she was the star pitcher of the softball team in middle school and didn't focus on relationship, but now that she's in high school she has a new goal: to have a shoujo manga-style relationship. While Haruna tries to be attractive and get a boyfriend, she has no idea how to accomplish her goal; and thus, she recruits the reluctant Yoh as her coach. Yoh is very attractive and dislikes women and the problems they cause, but is impressed by Haruna's determination and agrees upon one condition: she promises not to fall in love with him. Thus begins the crazy relationships of Haruna, Yoh and their friends as they all struggle to find themselves and their true loves.

This was a really juvenile story about a doe-eyed hyper high school girl in complete infatuation with her first relationship.  Now, I liked Haruna a lot.  She was a charming character a lot of the time, really strong and energetic.  But this story has been told a million times and if it's botched, it's a dreadfully boring story, and this was.  Kimi ni todoke would be an example of a good rendering of the exact same issues and characters.  Haruna is desperate for love and for anyone (she actually says this! anyone who likes me will do!) and she starts dating Yoh almost immediately.  So whereas usually with this type of cool, indifferent, stoic Yoh character can be quite appealing in a romance story because of the slow development and the significance of him showing any emotion, all of that is washed away when they start their relationship.  Everyone knows that in a good romance, the best part is almost always the beginning just before they reveal their feelings, as they draw close then pull away a dozen times.  This doesn't happen in this story at all.  Haruna's devotion to Yoh might be cute in another story, but it just comes across as desperate and like her entire life and existence revolves around this boy.  And this is quite true since there is not one episode where anything develops about anything not involving Yoh and him being either mad at her or distant or what to get him for his birthday.  Haruna is always freaking out about being a good girlfriend and I can't even think of one scene where she isn't obsessing about it with her friends or alone in her bedroom.  The story has no substance, no depth.  Yoh himself may have a lot to do with this.  The way he is drawn, he almost has no emotions.  When there are close ups of his face meant to convey something significant, I almost never knew what that was because his face is always the same and it always looks blank.  There is no affection between them and little romance.  The story went nowhere and I read through it in 2 days just so I could be done with it and move on to anything else.

This story is amazing! There are so many romance stories, books or manga, that are cliche. which can be nice sometimes. its light, fun, ect. The characters ensure this is not one of those. The story is a popular boy and a weird girl falling in love. Sounds cliche but the characters are so interesting and not at all cliche that it is beyond worth it. It was one of my favorite mangas i have ever read. it is one of my favorite love stories ever as well. The art is cute but not overly so, the story is great, and the highlight is of course the characters are beyond awesome. Ihate to sound gushy and girly but it is so good it pulls it out of me. Overall its a solid 10 and a must read! 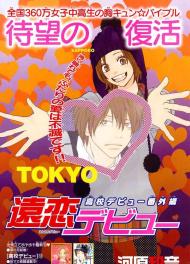