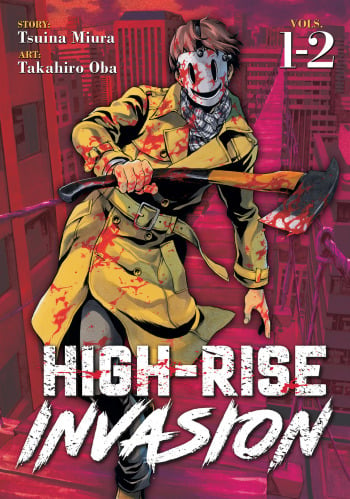 This was an incredibly unique manga. I saw a previous review that mentioned towards the end nothing makes sense, but I would have to disagree with that. There are a few new elements introduced, but they do fit nicely in with the plot.

In this manga, Yuri Honjo and her brother end up in a different dimension where people controlled by masks have two missions- 1. To get you to kill yourself and 2. To kill you themselves. In this absolute survival manga, Yuri Honjo witnesses humans killing humans, betrayal, and gets to look evil in the eye. She decided that instead of playing by this dimension's rules, that she is going to climb to the top of the system and destroy everything once and for all.

If you're looking for a manga with strong female protagonists, hello, this is it!

At a few points, I must admit, the writing did seem a little stale, because the same phrases were used over and over. There's not a lot of colorful, or descriptive language, but it's a shonen manga, so take it as you will. The characters all had their own personalities, and goals. And, the art was lovely! THe background art had tons of detail put into it (I feel bad for whoever was drawing the buildings every panel!).

It's an extrememly binge-worthy manga, filled with interesting twists and turns. My only real complaint is that I wish I could have seen the aftermath just a bit more, and what happened to everybody, but all in all, it was an exellent manga if you're looking for something a little more unusual or out of the ordinary.

EDIT: I picked it back up out of curiosity, and I realized my earlier decision to drop the manga was the correct one.

I finished reading it from 215 to the end (258). The story just goes off the rails. Nothing makes sense. At all. None of the characters make sense, what they do doesn't make sense, and what happens doesn't make sense. This is one of the worst cases of "fizzle out" I've ever seen in manga. It's like the mangaka ran out of ideas after 170 chapters and started pulling random shit out of a hat to continue the story.

I'm willing to bet that the publisher felt the same way, because around Ch. 240, you can see an immediate shift to try to hurriedly finish the manga, and the final few chapters are absolute garbage. Super sad that an incredible start to what could have been amazing ended up nosediving. Yikes yikes yikes.

Eh, I ended up dropping it @ Ch. 215. Starts off f*cking fantastic, but then the plot just meanders all over the place and sh*t just doesn't even make any sense anymore.

Okay, so for the first ~150 chapters or so, I basically binged it. I discovered it @ 11pm one night while browsing some random mangas, and after reading a few chapters, I was hooked. I caught all the way up through the entire 150 chapters by pulling an all-nighter, and I basically hated myself the next day at work.

But now that I've been sticking with it a while, it sort of starts to lose its edge around Ch. 170. Stuff starts to make less sense, and there's a steadily increasing amount of plot convenience. Transitions between arcs don't happen well, and oftentimes they feel almost a little too forced. The last straw for me was the latest chapter (as of this writing), which is 215.

Characters are less interesting than they were in the beginning, and with a few characters we revisit, it's been so long that I don't even remember who they are or when we encountered them...

Artwork is good, story starts off bloody fantastic but ultimately is tapering off. Eh.

I would highly recommend this manga, I wish there was a faster updates....
(Weekly manga. <3)

great action and premise. there are strong female leads, however they are drawn very sexily and it's a bit annoying.

it ended with a fizzle, but i enjoyed most of the story itself- it's like hunger games on crack.

Decent manga at most.

A better way to refer my feelings about this manga would be to call it for what it is... Junk food. The first thing you will notice is the beautiful art by Takahito oba, it is eye candy for sure. Sadly not a well-written manga, there are a lot of cliches typical of this genre plaguing the story, the character can be very hit or miss and the fanservice can be a dealbreaker for some people. After two volumes you just stop feeling dread, the main characters have huge plot armor, stronger than a Jojo main character, nothing can happen to them, they are gods among men and woman. Main character brother was the best thing here, I gotta say he was really likable, also the sniper mask, I can imagine people wanting to cosplay them. People have said that the story goes apeshit by its conclusion, and let me tell you... it does... it was glorious, a total shitshow.

Actually... yeah, it's ok, not great but I'm sure people can have a good time with this.