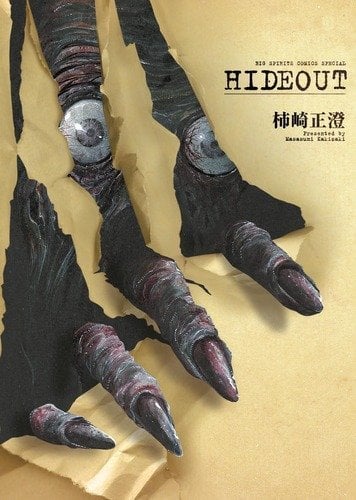 It goes from dramatic reasoning to psycho lunacy and only gets better from there. From a man's good intentions of trying to reconcile with his wife to his intent to commit murder, it starts off a tad dreary and goes to hell as things take a turn for the creepy. It's an unpleasant read, but in a good sense.

In the single volume that encompasses it, we get to know enough of the main to feel like he isn't just a cog in the machine to move the plot along. He has depth and his wife is given some padding out, who is simply more than a miffed miss. We know more about how they got there instead of just a disturbing present and unpleasant circumstances and more about the situation at hand, but not everything. Some explanations are left out but if everything was explained it wouldn't be as imaginative, would it? Or it wouldn't be... as thinky as things go.

But you know: past, check. Present events go along in a grim and what I think is a realistic and stylish art style. It feels sketchy at times but in a way that benefits the tone. It lends itself to the creepiness and with excellent use of shadows makes the suspense and chills all the greater. It's unpleasantly pleasant to the eye without resorting to absolute gore and blood to make a point. Features great character design in terms of the main, the cave dweller and the boy.

I've been on a recent horror/psychological kick recently, and that's how I stumbled upon the short manga, Hideout.

I expected it to be your run-of-the-mill horror manga, but it had it's own unique take, reminding me more of American horror movies than the surreal vague feeling that Japanese horror gives off. The artwas spectacular, and perfect for a horror manga- Dark imagery, heavy rain. It was all so fitting. I enjoy that the main character is not a good person, even at the start, as he plans to kill his wife. Instead of being a niave victim of circumstance, he's a calculated person with a premeditated plan.

The themes of cannibalism, and being confined were good too,, without feeling like the mangaka was trying too hard or going overboard. There's also a really nice twist at the end.

It's a manga with no happy ending, and it works really well for what it's doing. THe pacing was nice. Everything was explained well. It never felt rushed, or slow. A definite recommend.

Guys literally, this is such a decent 9 chapter horror manga that I've ever come across!

The story goes about a  couple who's marriage is pretty much "on the rocks" and can I just say here, the wife is a major assh*le in this like she treats her husband so bad. The poor guy was a struggling writer and like, he was guilty of their sons death. Yet she on the other hand, seemed to care less about the sons death and is pretty much a selfish character that I absolutely loathe to put as one of my most hated characters list lol.

Anyway he turns crazy and the rest where they enter the cave is where the interesting and thrilling shenanigans start to happen folks!

Now personally, it ain't scary but more psychological in its way. However it really gets you and the art is *chefs kiss* for a short horror manga!

Its all about a guy who wants an happy family but it ended up wrong. Everything messed because of his son's death. Everyone blame that guy of his son's Death. But he blame his wife that he killed his son. So he tried to kill her wife in the forest. But thats the day where his life changed by just going in the cave.

The art was okay sometimes theres a chapter give me goosebumps and the author was doing good making this manga. But it well done how they made the monster(or I dont know what so called it is) the face is creepy but for me it isnt his face is funny. And those sudden scares. Its so gorey and theres a little bit disturbing.

The characters well .. I only like theyre son is so cute those parents of his aah! They messed up trying to kill each other just to have vengeance of the death of his son. When they said they will have new start new life. Well this is theyre new start killing each other -_-"

I did enjoy this manga! You dont expect whats going on even do theres on 9 chap. Its kinda worth reading. Since The guy really want to have a new life have a happy family but her wife didnt cooperate. Even do it isnt what he expected his life to be .. I hope his having fun :/