Alt title: A Crazy Elf and a Serious Orc 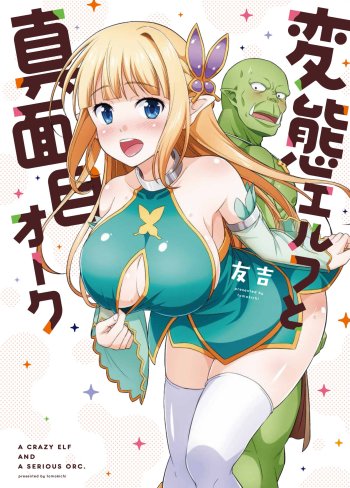 As his casket was being closed, The Great Sage Marlin Endlight used his infinite wisdom to reincarnate himself into a "Endlessly Evolving Slime". He decides to enjoy his new slimey life, until his third daughter finds him and casts a taming spell on him! Living as a familiar to his foster daughter isn't too bad: Not only is he constantly getting hugs, but he can stealthily continue to evolve and watch over all his beloved daughters. Until he obtains a human form, he will hide his true identity from them. But let it be known that while Sura-chan (ex-Great Sage) is around, no number of greedy fake researchers, bandits or evil cults will harm his girls!

She wants the D, but more specifically, the Orc's D. However, she only finds a d and is waiting for it to become a D.

What happens when the rarest of rare meets someone who might be even less than ordinary?

Naoe-kun, a massage therapist, is about to head home for the day when he's saddled with a rather strange patient. This lovely lady has emerald eyes, pointy ears, and grew up in the forest–everything about her screams “elf,” except for one thing: her bodacious body. It turns out she left her world but loves junk food in this one, and now her obsession has caught up with her. Can Naoe-kun help this loveable elf girl lose the weight–and keep it off?