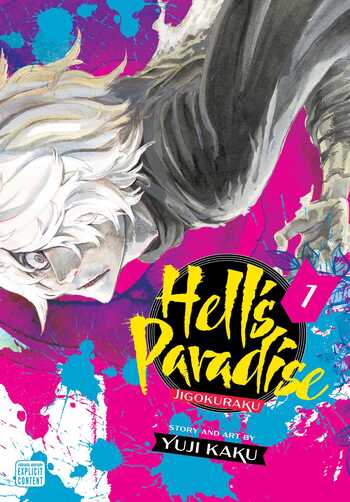 TL;DR - Really great read for those who love a good action/survival story.

The premise itself is a variation on a story you've all heard before - surviving on an island. But instead of being randomly kidnapped and dumped on the island, we actually have a bunch of criminals and their executioners who've been sent on a suicide mission to recover the "potion of life" for the emperor.

It could be broadly categorized under action, fighting, and shounen, but you're not inundated with cliche "courage conquers all" and "power of friendship" bullshit. It's actually refreshingly down-to-earth, and it actually gets a little dark and philosophical in some places. Unique twists and likeable characters keep you excited about what will happen next. It's not just an action manga, and the whole situation turns out to be way more complicated than you're initially led to believe.

There are slight hints of romance in here too - not enough to consider it romantic per se, but just enough to keep you curious. The character development is phenomenal. We witness material changes to many of the characters as they go through the journey, and it all happens both beautifully and believably.

The art style is also unique - it's both very pretty and very scrappy in its own way, which perfectly mirrors the story and the characters in it.

If we consider a spectrum where one end is feel-good, shounen-esque action and the other end is dark, gritty, and slow-burning drama, Jigokuraku fits nicely in-between. A perfect balance of exciting action and gritty drama.

Other mangas in a similar vein:

If you like any of the above, then you'll definitely like Jigokuraku. Here's a graphic I made based on my opinions of where these fall on the scale:

Masterpiece. Thats honestly all I can say. Looking for a seinen manga with great characters, art, writing, ending, fights, storytelling, twists, turns, and everything else that makes a story great? Read This

ah yes the power of love saved everyone........ lol the last 30 chapter the manga decided to lose credibility.

I have no idea why people are rating this manga lower than it should be but it is BEAUTIFUL. IT IS GOLD. The art is amazing. I've taken a lot of screenshots because yes, and the storyline is really good. The characters are pretty detailed and SPOILERS but THE END IS AMAZING PLEASE. And I also cried a few times throughout the story. I'm sorry if I'm weak but I seriously love this manga thankyou.

Really good, The only thing I hated about it is the cliche ending, and that it ended too quickly, for me it feels like it should have had more stories to tell, maybe its because I was just so interested with the world that's why I wanted it to be longer. That's how entertained I was, I really cant write anything longer than this because I read this a long time back now, I m just here to praise to because it deserves a good score here. For me the (3) dark shounen right now, Chainsawman, Hells paradise and jujutsu, I'd place this 2nd below chainsawman, its much more intresting for me in terms of comparing it to "jujutsu overated kaisen" in terms of world building and character complexity. The reason why chainsawman is better its just that chainsawman is beyond, and kinda bias because its my favorite.