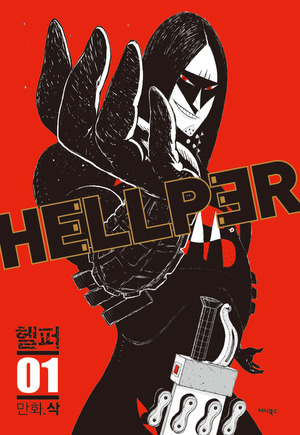 The story is very shounen-like, the main character has to save his loved one, encounters strong enemies and has to fight but he keeps his own good morals and honor no matter what happens. But it works because it is done so well, the action is great, the comedy is funny and the story draws you in wondering what will happen next without getting too predictable.

I also like how the author switches between Hell and the world of the living so you get to follow two stories alongside each other. The aftermath of Gangnam's death and Gangnam's struggle to save his loved ones.

Unfortunally the later chapters can be confusing because of the many characters and their stories intertwining each other. It also is very action filled towards the end without taking time to deepen the developmends. But it might help to read the later chapters in batches instead of the week by week read which I'm doing right now.

It might be unusual at first but in my opinion the art is the best of this webtoon. Hell is portrayed mostly in black and white with an occasional color, but once a while some amazing almost modern art-like scenery is shown. The real world contains a lot more color so you have this contrast of black and white in hell and the colorful world of the living.

PS
Make sure to notice the author notes on your scrolling speed!

The main characters are Gangnam and Sese but there are many more interesting side characters.

Gangnam is your typical shounen hero, always respectful, never fights dirty and willing to sacrifice himself for his friends despite having had a hard past.

Sese, my personal favorite, her background story is so well made. Even the teddy bear she carries around has such great back-story, a little disturbing, but it was amazing and fresh.

A great and funny action filled and amazingly drawn web comic which deserves more attention. If you like action and want a story which draws you in with some beautiful art this will be the manga for you!

When it comes to Korean webtoons, Hellper is a bit of an oddball. Although in Korea it's about as popular as Tower of God (a poll on Naver even put Hellper above ToG), it doesn't get much attention outside of Korea. This is painfully clear in the meager 7 ratings this manhwa has at this time, while ToG has about 2000. So now I find myself here, trying to put in words why Hellper is good and why you should read it.

The story centers around Jang Gwangnam, leader of Killberos. Killberos is a group made up of gangsters, who were gathered by Gwangnam to give them a chance to live relatively normally in society. Killberos was also the reason why there was so little crime in their city: Gwangnam organised them to protect.

... and then, in chapter 1, Gwangnam dies and he becomes a naked ghost with a black ticket - which means that, if a reaper finds him, he'll be sent to Hell.  But Sese, the first friendly ghost he meets, tells him that there's still a chance for him: when one collects 100 black tickets, they can be traded for a white ticket, meaning Heaven or Reincarnation. Of course, this means Gwangnam will have to go look for other ghosts, to fight them. Sese also points out that there's something odd about his death, introducing a nice touch of mystery.

The comedy is on point (Gwangnam is one hilarious character), and the build-up of suspense is handled well too. Fights are exciting and unpredictable, there's no "power of friendship", but also no "absolute power".

Something I also like about this series, is how the world of the living isn't forgotten. The consequences of Gwangnam's death for Killberos are also important. This in combination with his actions in the afterlife help to establish the "character" that is Gwangnam.

Speaking of characters: about all of them have some degree of interesting-ness. This is especially true for Sese, Gwangnam's "sidekick" in the afterlife. From all the series I've read so far, Sese has to be one of the most unique characters.

Aside from those two, the other characters are handled well too. A nice touch was the added backstory for a teddybear, and for Gwangnam's granny.

And then there's the last thing I need to address, but certainly not the least: the artwork. If you have taken a look at the character section and the cover pic, you should have noticed it already: the style is unique. Mainly black and white, with often only 1 basic colour added to every person. It took me a couple of chapters to adapt, but once I got used to it  could only say "wow, this is great". The art works very well in both the "static" scenes and the fight scenes.

Overall: are you a fan of good stories, with a bunch of cool/interesting characters and a unique artstyle? Then you should definitely give Hellper a try.

P.S.: This manhwa is being translated at webtoons.com, where there are 84 chapters out right now. There are some things that are mistranslations (eg "Black bird" while it's supposed to say "black king"), so be sure to check the comments (most of the time someone will point them out there)

Great story but i feel depressed, NTR warning gets dark in the second season not at all like the beginning but yeah characters are great and I loved the story even though it mostly went over my head. Really reminds me of ASURA. I have reached the sadness level where I have now learned the ways of the Buddhist monk and have now reached the path of enlightenment until tomorrow when I forget it and then remember it all over again.

I absolutely thought the visual art overall was amazing and the characters were pretty much likeable sorts. I was especially sad for Sese who clearly had a rather unusual occurrence at the beginning of her life. Whereas with Gwangnam, he's just your usual clever hero troll who literally likes to be getting on everyone's nerves.

Now I will admit, the story was rather generic and felt super longish to read for 188 chapters (got very bored easily). However it does keep you going with the art style and the likeable so it is something to waste time on , especially if you can't find a particular manhwa to read!