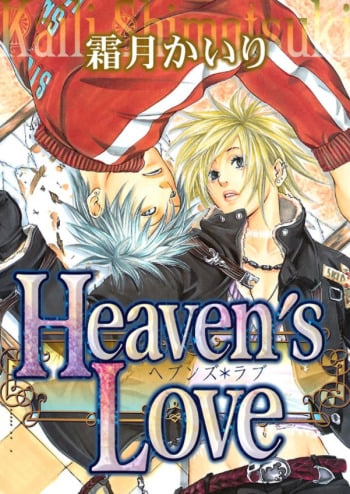 Kurosagi Hitoshi had a phobia of getting intimate with another person! Out of loneliness, he came to a lover rental service center and signed a lease to rent Masato, a gentle android skilled in sexual techniques! However, this seemly perfect lover whom Hitoshi fell head over heels for had one fatal “defect”…!

Sweet young Kai and the doctor Maria shared a bond that they thought no one could destroy...until Maria's brutal murder tore her from Kai's arms forever. Now, Kai wanders the pitch-black streets of the inner city searching for the man who stole Maria's life. But will he end up a pawn in a gang war that will force him to fight for his very existence? With both a mysterious electronic frequency and a strange, powerful man named Lahti shadowing his every move, Kai must slay his new-found enemies...or fall prey to their desires!

Mamiya is the seemingly aloof owner and master of the mysterious "Mamiya Doll House", a store that can make your every dream come true with its perfectly lifelike Bioroids. But what will cool Mamiya do when faced with Kobayashi, a persistent young man who has fallen hard for him, and is the type to never give up once he's set his sights on something?!

It seems like the gorgeous street-fighting champion Nozomi is invincible...until a beautiful stranger known only as Coyote shows up and snatches away his crown. Nozomi’s penalty? He must become the slave of a “peeping room” website where any lazy perv can spy on his life 24/7! At first, Nozomi’s only goal is to raise the ransom needed to buy back his freedom. But a mysterious plot involving secret surveillance, the moon and ancient computers soon comes to light. Does Nozomi hold the key to solving an interplanetary crisis?

An alien boy with magical powers becomes lost while on a school excursion to planet Earth. A local street magician takes him in, but he has a dangerous secret of his own.

Tsutsumu Shisui is brought up by his grandfather, Dr. Yuujirou after his father, Dr. Hiromu died. But now Yuujirou also died with a lot of debt. At Yuujirou's funeral, Tsutsumu's cousin, Sou Takigawa suddenly appears and declares that he wants to take care of Tsutsumu.

After disobeying too many orders, Nicky is put through some “training” via Super Virtual Reality, which has no limits to how much pleasure it can provide. “There are many who can resist pain, but… There are few who can resist pleasure.“

Modoru, who works at a doll maintenance factory, has always admired his co-worker Susumu's courteous work on the dolls. One day, while only the two of them are working, Modoru is caught up by how kindly Susumu's fingers move. Noticing it, Susumu mumbles 'I want to do this to a living body', which leaves Modoru with a tingling feeling in his heart. Others include, helping a love-crazed best friend with sex, Urasuji Tarou, who saves a beautiful male turtle, a no-good man struggling to get a straight guy's attention, Hinoyama's physical education, etc.