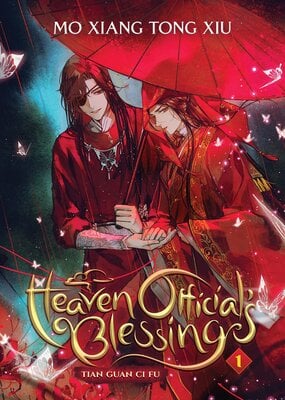 Born the crown prince of a prosperous kingdom, Xie Lian was renowned for his beauty, strength, and purity. His years of dedicated study and noble deeds allowed him to ascend to godhood. But those who rise may also fall, and fall he does--cast from the heavens and banished to the world below. Eight hundred years after his mortal life, Xie Lian has ascended to godhood for the third time, angering most of the gods in the process. To repay his debts, he is sent to the Mortal Realm to hunt down violent ghosts and troublemaking spirits who prey on the living. Along his travels, he meets the fascinating and brilliant San Lang, a young man with whom he feels an instant connection. Yet San Lang is clearly more than he appears... What mysteries lie behind that carefree smile?

Heaven Official Blessing is the largest of the trio of mxtx's novel. It has five volumes in total out of which 2 and 4 give the backstory and the rest the current events. When you intially start reading the it, especially the first volume, you will.want to drop it. I have too, twice. But keep reading, and you will not be disappointed. Heaven Official Blessings spin the thread of fate and love for over 800 years. As the story progresses you will be bombarded with a barrage of emotions that our story's protogonists Xie Lian and Hua Cheng feels through his centuries of life. It's a story of mysteries, cultivation, gods and ghosts, ancient cities buried under volcanic ash. I a gripping tale amazing beyond words. It will make you laugh cry and go tense with suspense at the same time.

i have no words for this.... just..... wow. heaven official's blessing is the longest of mxtx novels and the most well-written one. the emotions you feel while reading this, the story is tremendously beautiful. i cannot even express my love for all the characters and their complexity, especially towards the main couple. gosh, their lives are so deeply connected, their love is so strong. this trully picks the concept of the red string of fate, destiny, true love and devotion an slaps you in the face with it. 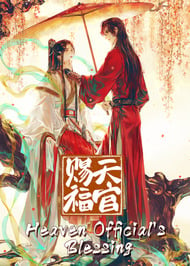