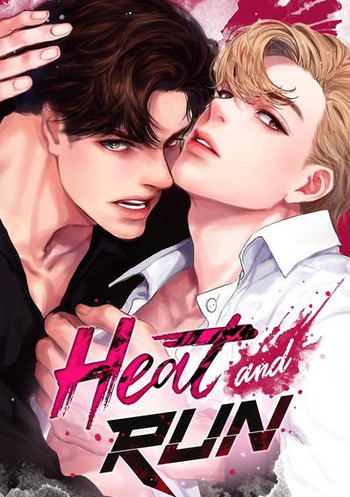 Tbh it's just a fuck fest, the plot is there but like there isn't any hook the characters are rather basic and there is nothing new to them. They have no pull, I mean its alright no issues with them but everything feels plain.

I really like all the characters, they all have their own special thing. There's also not much conflict and the relationship progresses smoothly.

I can partially understand why it's called heat and run, there's this level-headed alpha named Matthew who looked fine at first until his rut cycle came and made him go all yandere animalistic with bits of coercive tendencies, shit raises more red flags when even the eyes turn yellow, so run, Barry Hayoung, RUN, run from the alpha in heat/rut

Anyways this only pertains to the second couple of the story the first couple jaeho & Ian is the main ship. Their story revolved around a misunderstanding from when they were in school that lasted until Ian & his brother decided to travel to America where Jaeho's in. It's not until soaking in the sizzling hot American heat & Jaeho's pheromones that the years of misunderstandings is cleared 👏👏. Ian is totally adorable for thinking that Jaeho sees him as an alpha and Jaeho is also adorable for liking Ian when they were young and claiming him to be his omega after that rut session, I dun see them that much in later parts due to the Matthew-Hayoung's reality drama plus I'm not even finished with the story yet but after that's settled go make some babies you two

I'm only on chapter 47, but I definitely like the plot. The artwork is ok, but sometimes I got confused with who's who because they all looked pretty similar aside from the eye color. I don't like the sudden shift in storyline and I hope as I continue to read I get more from the first main couple. I do enjoy the second couple as well, but I want a little more.