He Dedicated to Roses 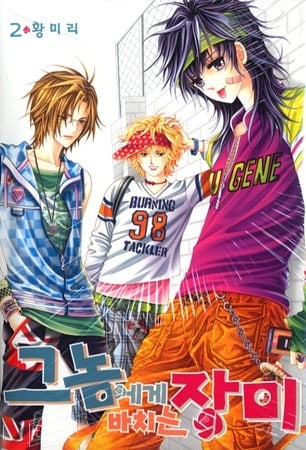 Ida Choi’s family is deeply indebted to the parents of Mimi Shin, a spoiled, self-important brat. Ida is forced to do anything and everything that Mimi commands her to - or else her family will be thrown out into the streets! However, she can let off some steam by dressing up as a guy and fighting neighborhood delinquents. Ida’s become such a skilled fighter that guys come from all around to brawl with her male alter-ego “Yodah Choi”. But with delinquents obsessively challenging her and Mimi refusing to let her have any time for herself, how long can Ida keep her double life a secret?

Ah, the Shoujo soap opera. Most beloved of all the nonsense genres (I don't actually know if that's true, I just can't think of anything else to put here). Ha ha! I didn't realize this was a manhwa at first, so I read the first ten or so pages manga-style. Upon recognizing my mistake, I re-read them, and it made way more sense. STORY After her family goes bankrupt, Choi Ida is taken in and bullied by her childhood not-so-friend, Shin Mimi, who forces Ida to do anything and everything she wants. Ida is unable to stand up to Mimi (or her family will be turned out on the streets), so she takes out her frustration by living a double life- by inventing and dressing up as Choi Yodah, a boy who has earned a reputation as one of the toughest fighters in the area. Drama ensues. This quickly turned into a whirlwind of ulterior motives and double-crossing, as Ida tries not to let anyone find out she's Yodah, and vice-versa. Which is difficult since they eventually run in pretty similar social circles. The density of some fictional characters will never cease to amaze me. Despite delighting in depicting copious amounts of hot boy-on-girl-dressed-as-boy "fauxnen-ai", there is quite a a bit of "homo"-bashing. It's one of the worst insults in the manga, and at least one chapter revolves around someone trying not to get beaten up after being accused as gay (Soooo politically correct! umm... cultural difference?). The result reminded me of those rappers/hip-hop artists who exclaim "no homo" right before launching themself into a lengthy soliloquy about how much they love their brothas (no homo!). Odd, indeed. ART Standard shoujo fare. The bishounen were bishounen-y (complete with sparkles and bubbles!), everyone else had the perfect amount of generic cuteness, and it did that thing when the eyelashes are drawn as white in the really close-up frames (I hate that thing!). CHARACTERS Fairly stereotypical. Ida (protagonist!) was of the new(ish) "tough" shoujo heroine trope, but wasn't terribly relatable, and didn't get much emotional depth. Nobody did for that matter. The gangs (literally) of bishounen were generally all in the "incredibly wealthy, but misunderstood, bad-boy" group (I'd never seen so many different takes on the same character-type in one place), though, in their credit, they were easy enough to tell apart. Mimi (antagonist!) was bitchy to her core, and did an excellent job of it. She was mre of a plot device than a character, though, and her motivations for being so unpleasant were never fully explained. OVERALL What the manwha lacks in quality, it makes up for in entertainment value. Like I said- it's a soap opera. The constant fluctuations in people dating each other (including their ulterior motives for doing so), backstabbing, gossip, and bishounen-infested gang brawls made this really hard for me to put down. Like when people slow down their cars to look at accidents on the side of the road.