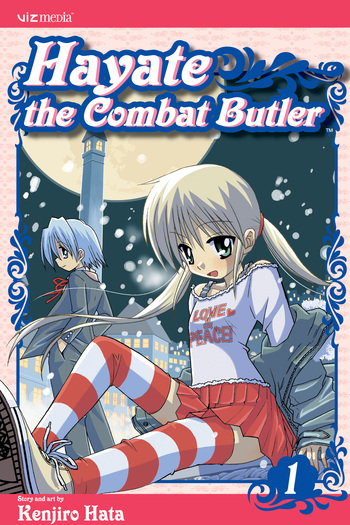 Hayate no Gotoku is a very good manga. I highly recommend you read it right now before it gets too old and you can't get the absolute number of references this manga has.

This manga starts of as our MC is left with a whopping ¥156,804,000 by his very greedy parents. To pay off this debt, he resorts to kidnapping. His target is surprisingly a very rich 13-Year old named Nagi Sanzenin. For better or worse, Nagi misunderstands this as a Confession. Through a string of events, Nagi pays of Hayate's Debt and he becomes his butler.

The art is the kind that you see at old mangas but it changes at around Chap 300 or something.

NOTE: These are the ones that have the most screentime.

Hayate no Gotoku is a masterpiece. You can enjoy this for its comedic value. Though the art may be bad, it becomes better later on. This manga likes breaking the fourth wall. I see nothing wrong with this manga. Absolute Perfection.

Did you know that Hayate no Gotoku and Tonikaku Kawaii have the same Illustrator? (Kenjiro Hata)

For its manga artstyle, you maybe slightly dissappointed (and maybe a little bit annoyed) for its rough-ness. But I assure you, its storyline, character development, all is in perfect order. It has harem style inserted, with Hayate being loved by almost everyone around him, makes you kinda eagerly awaiting who he end-up with. It also has tsundere characters, too shy to confront their feelings to Hayate. Additionally, it also has reverse love (SPOILERS: Kotetsu fell in love with Hayate-kun, and Miki Hanabishi, who secretly admired Hinagiku).

But most important of all (to me, at least), this is one of the manga that makes me cry (it is a manly tears, even if its a little). I literally cried during A-tan's arc (later part of Volume 17 and earlier part of Volume 18, chapter 178 to 187 to be precise), although it depicts on Hayate's childhood memory, it really gives an impact, and makes me cried the whole chapter when I'm reading.

That's all for now. Do read the manga as I managed to read all 413 (at this time) chapters in only one whole day and one sleepless night. Maybe you can call me obsessed too, since I've watched all season of its anime version and OVA. Adieu!