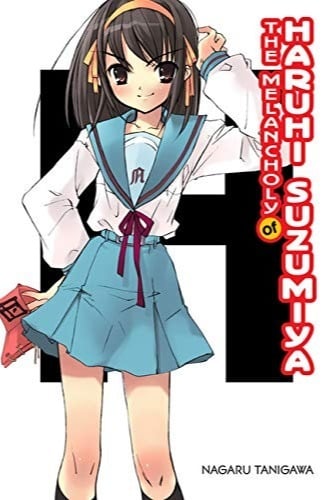 If you're looking for manga similar to Haruhi Suzumiya Series (Light Novel), you might like these titles.

Teiichi Niiya is a first year middle-school student at Seikyou Private Academy, an institution known for mysterious occurrences. The boy quickly finds these rumors to be true when he meets Yuuko Kanoe, a beautiful, mischievous girl who quickly takes a liking to him... and happens to be a ghost who seemingly no one else can see! Unable to remember anything about her past, Yuuko enlists Teiichi’s help to discover the truth, and together they join the school's Paranormal Investigation Club. With fellow members Momoe and Kirie, the pair will investigate the many strange happenings around campus, including the shadowy circumstances surrounding Yuuko’s death.

Both Melancholy of Haruhi Suzumiya and Tasogare Otome x Amnesia revolve around a school club which investigates supernatural phenomenas (at least that's what SOS Dan was suppose to do). In case of both of those series the cause of most of those phenomenas is actually the girl leading the club. Characters in Melancholy of Suzumiya Haruhi are more interesting, but Tasogare Otome x Amnesia features some romance and there are for more supernatural cases for the club to investigate. If you liked one of those two series, you might actually like the other one too.

One day Shinobu wakes up just to find a naked blonde girl sleeping besides him. He has no memory whatsoever of her. Who is she? Why is she in his bed? Why is she naked? To make matters worse, his sister comes in and sees them. What will happen now?

Both Tsuki Tsuki! and The Melancholy of Haruhi Suzumiya feature a male lead who meets a god. Said god happens to be a rather cute girl. But the most important part is that both of those male leads are somewhat sarcastic and that they distance themselves from weird things that happen around them. Although Melancholy of Haruhi Suzumiya is a harem of sorts, Tsuki Tsuki! is a regular harem series (aside from the male lead) and it has a little bit too much ecchi in it. Anyway, if you liked the male lead in one of those two series, you'll probably going to like the male lead in the other series as well (though not necessarily everything else).

Shirasaki is incredibly bored by his unchanging daily school life and he ends up falling for his weird classmate Kamimura Yuuka, who rants about changing the world to his uninterested classmates. However, when she reveals the truth about the nature of their world to him, everything will quickly become stranger than he would ever have expected!

In that case look no further, Classmate, Kamimura Yuuka wa Kou Itta. is exactly what you are looking for.

Do you believe in ghosts and stuff like that? I never did, until recently... Did you hear that girl Kagome Nishino created some strange club called the 'Paranormal Observation Club'!? I just don't get her! What, me join? You gotta be kidding me!

Both series involve a bossy girl who forces some guy to join her paranormal investigation club. If you like this theme go check both of them.

Both series revolve around a hyperactive girl who pulls this normal guy into her crazy antics. The two of them are joined by a bunch of (mostly female) odd friends. Those characters are quite similar between those two series (most likely one was inspired by the other). The key differences would be that Kebukurohatsu, Zensekai Yuki! features more fanservice and lots of otaku related content, while Melancholy of Haruhi Suzumiya has those supernatural things going on. If you read one and liked it, you might  as well try reading the other one too.

Fujimura is a loner delinquent at his school. Feared by his classmates since the first day of high school, he's had no friends and usually ditches class. But even his standoffish nature can't hold up when a class representative with a few screws loose comes after him! And two more class representatives. They're a few cards short of a full deck too.

This recommendation is based just on one thing: both Fujimura and Kyon mastered the secret art of tsukkomi. If one of those guys managed to make you laugh, it's safe to assume the other one will do so as well.

Combining mathematical rigor with light romance, Math Girls is a unique introduction to advanced mathematics, delivered through the eyes of three students as they learn to deal with problems seldom found in textbooks. Math Girls has something for everyone, from advanced high school students to math majors and educators.

Recently mathematics was quite popular among adults in Japan. People studied math in their free time for their own enjoyment. I suspect Tanigawa might have been one of those people, as he actually adopted some mathematic formulas into The Melancholy of Haruhi Suzumiya novels. If the bits of mathematics in that series caught your attention, than you might be interested in Suugaku Girl which incorporates even more math.

Yuuki Akamatsu, is a boy who joins the staff of his school's second newspaper. The editor-in-chief Ayaka Nikaidou immediately assigns him to the life (Jinsei) advice column. There are three girls; the science representative Rino Endou, the liberal arts representative Fumi Kujou, and the physical education representative Ikumi Suzuki. They answer requests from students about whatever is troubling them. The three girls, however, can never agree on anything, so Yuuki must mediate between them to choose the best advice.

Kishimine Kengo, a boy who moved into a high school that was an all-girls school until several years ago. In spite of the so-called harem environment where he was surrounded only by girls, he wasn't good at socialising and his sole hobby was immersing himself in reading. He lived a quiet life. But, he decided to participate in club activities that he hadn't done until now, and so his high school life changed into something stormy and full of drama. He joined the one where he played modern games – in short, the game club. Kishimine was supported by the beautiful student council head and a perverted teacher, and he displayed unexpected talent. Now the curtain has been raised on the exciting gaming life of an ordinary boy.