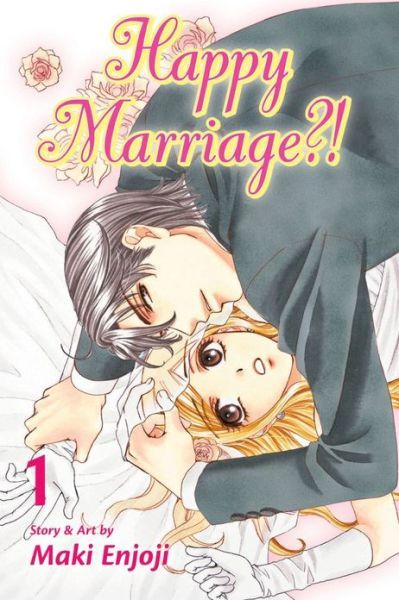 In order to help her father, Chiwa Takanashi agrees to an arranged marriage with the company president Hokuto Mamiya – a man she doesn’t know – at the request of Hokuto’s grandfather. Chiwa believes the arrangement isn’t binding, but her new partner seems to think otherwise. Can two strangers living together find their way to a happy marriage?!

This past month or so I’ve been in a serious smut kick. No, not H, but some decent smut. After plundering through so many mangas, I discovered that usually this genre comes with whiney girls who are raped and abused by the male protagonists, and somehow the women eventually fall in love with the men. I came across Hapi Mari, and I was pleasantly surprised with the quality of this work.                 The premise behind this story is essentially Chiwa (the main women) is forced to marry Hokuto (main man) so that his family will repay her father’s immense debts. This isn’t really a unique plot-line, but instead of having the man rape the woman on the first night, he actually respects her (to a certain extent). He makes an arrangement with her that they will never cheat on each other, and he will never rape her. I found that nice.                 Secondly, the characters actually have development! Chiwa sort of develops into a tool strictly for Hokuto’s use (not necessarily a strong point in a feminist POV), but she does maintain a semblance of independence. Hokuto develops a heart pretty much.                 Without giving out any spoilers, I will say that Hapi Mari was one of the best manga I’ve read in a while, and I’ll be thinking about Hokuto and Chiwa.

The premise is this story is is not really original. It involves a two strangers who were arranged to marry each other due to some cockamamie reason. Predictably, they don’t get along at first but eventually fall in love. Also, unsurprisingly, there is drama along the way. Despite this, the story is actually a pretty good read. It’s a light read that has a little bit of mystery, tragedy, comedy,smut and a whole lot of romance, drama, and anguish.  As a whole, the biggest con were the characters themselves. I have a sort of love/hate feeling towards the main characters Hokuto and Chiwa. Hokuto is a frucking prick. One of the the things that he did all the time which got annoying was sexually harassed Chiwa including, but not limited to, forcible molestation, threatS of rape, attempts of rape, and some questionable smut scenes that (based on your interpretation) that didn’t seem consensual at all. He also slapped Chiwa too many times for my liking, is constantly calling her an idiot, and uses sex as a way to solve all relationship problems. He is borderline sadistic and male chauvinist. He not a full on chauvinist though. Chiwa, for the most part was an independant woman in a lot of ways. More so in the beginning though. Eventually, eventually her life had NO meaning outside of  Hokuto. I would’ve liked to see her with some sort of ambition or goal in life separate from Hokuto. She didn’t really have one before him but I was hoping for growth that never happened. He became her driving force, the only thing that matter even at the cost of her own life. Her life was actually put in danger couple of times and she would NEVER let Hokuto know. If Chiwa thought anything became a bother to Hokuto, even her life, she would lie and deceive him to keep it from him. To Hokuto credit, he is the protector type. He would’ve protected/supported her. Along with lies and deception, Chiwa also cries throughout the entire manga. Almost every chapter, if not all of them, had her crying. It stopped being cute and started being annoying half way through. I just felt like she would create or make matters worse by lying and then cry about it later. The weird thing is, I feel like it could’ve been anybody that Chiwa fell for if placed in the same circumstances.  I don’t feel that with with Horuko. Chiwa is definitely his one and his love for her is what makes him more of a three dimensional character so I actually like him more that Chiwa (surprisingly). All the other characters lack development to be of any importance. The story centers around the two MC relationship. Neither one of them appear to have any actual friends or “close” “family”. Chiwa dad appears a few times when it’s convenient. She also have a few coworkers that she hung-out with a couple of times but I wouldn’t really call any of them friends. Artwise, I really liked the drawings in this one. The characters are not to pretty or outrageously drawn. Not a single character my biggest pet peeve in character drawings which is bug eyes. Eyes so big that the take up the entire face. Examples being Haruhi FUJIOKA from Ouran Host Highschool Club manga, Nika TAMIYA from Switch Girl manga, and Momofrom Tramps like us manga. a

In the begining I wanted to punch Hokuto Mamiya and cheered on Chiwa Takanashi. I wanted her to get everything she needed and wanted because she was caring, determined and self sacrificing and he was an ass. Towards the end I liked everyone and hoped for a happily ever after.