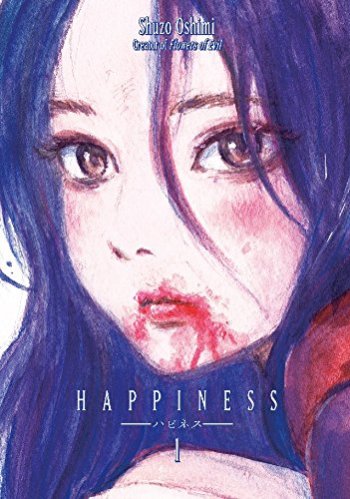 To put it plainly this is a Shounen manga. It might masquerade as something deeper and more mature with it's violent themes and nudity, but the level of character depth is really surface level, and the story has some pacing issues.

If you've read other works by Shuzo Oshimi it definitely feels like his writing style. The initial introduction of characters and the way they get fleshed out and developed lightly in the beginning is pretty decent. The manga starts to go down hill in characterization as it leads up to finishing it's first half though. Once you hit the half way point the story and characters both take a deep nose dive.

Like individually the characters are fine... I suppose. Like in the second half the fleshing out of characters happens quite naturally in a slice of life setting, and yet the time skip and shift in character focus just isn't enjoyable to read. More than that it also takes a while to ramp into the vampire stuff again. And once it does, it's just a clown fiesta that's unexplainable.

Perhaps I'm biased, but the works of Oshimi that I've read always give characters a motivation for what they're doing like in "Mari no Naka ni (Inside of Mari)" and "Chi no Wadachi (Trails of Blood)". Even if the exact reason isn't shown to us, it still gives us a decent reason to respect that certain characters have certain motivations because of something that's hinted to us. In "Happiness" half of the character's motivations for doing something are "just cuz", or "i'm crazy haha". Which is what it looks like on the surface level of the other manga he's written, but I know he can do better.

Overall the writing in this manga is just bogged down by Shounen magazine editing as far as I can tell. Characters getting saved at the last second via deus-ex machinas, and characterization that's paper thin for half of the cast or more. Also the time skips are kind of painful. The ending was decent which I can't say the same for "Mari no Naka ni", and "Chi no Wadachi" is still being published as I write this. The opening was good, but it becomes a train wreck within 15-20 chapters and stays that way until the end for all I care to commit to my long term memory.

A 3/10. Look else where for good story and characters, but if you're interested in gore, nudity, and "mature" stuff (edge) in a vampire story while not wanting a "complicated" manga, then "Happiness" might be of interest to you. Or if you like Ajin this might be alright as well. Though Ajin is even worse than this since it's just straight up edge and torture sensory brushing.

honestly, it was going good until the 20th chapter after that the story went straight off the rails, and it became boring

I was looking for something different, something darker. This was it. It was a very unique concept. The characters were unique, and believable feeling, something you can't say for your typical vampire manga. While it was dramatic, it was very realistic.  Especially in the stress-aspects of the way the characters mentally processed things. Some of the characters would lose their cool, and it was a nice portrayal of perhaps how people would act in real life, given the same circumstances. The only downside is that I felt it should have been longer. There were so many roads they could have taken, so many options to further pursue a story.

A refreshing read, albeit a bit uncomfortable in certain parts. Again, wish it was longer. But, enjoyable nonetheless. Recommended.

Great artworks with a considerably good story line, if someone prefer a dark but great storyline then this is it. With the ending it pretty much a good one to read and also there is so much emotional turn with the characters is admirable. Hope it will be animated someday.

Just finished reading this manga. Finished it in 2 hours btw..

It was absolutely amazing. if you're reading reviews to see whether it is worth it please ignore everyone else and read it. I swear you won't regret it.

I nearly flippin' cried at the end even tho I have NEVER cried for any books, manga, anime, or whatever.

It just like that "saying" (meme), 'I came here looking for silver and I found gold'.

If you do start reading it, enjoy it! ;)

However, I do feel it could have been longer. I guess that's a downside :c