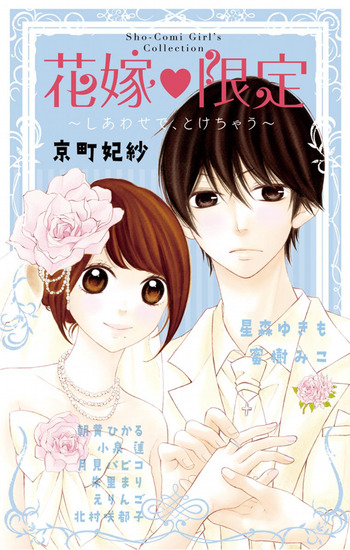 If you're looking for manga similar to Hanayome Gentei: Shiawase de, Tokechau, you might like these titles.

Sweet short story of a middle school boy in love with a high school girl. She is meticulous about wanting to know everything about the person she is dating. Her emotion conflict when she meets this middle school boy, who challenges her way of thinking about relationship. The author diligently places the character in a muddled, flustered, and distraught air of insecure emotions. She feels baffled because she can't comprehend why she likes him, even though she knows nothing about him.

The player, Fujikawa Mitsuki, likes to tease Haruna. One day their cell phones get switched. What will happen next?

Sakurai Azusa has a leading role for her school play as Alice, but the big problem is that her voice is too quiet. With the help of Oono-kun whom constantly scolds her to do her best, can she become a great Alice in time for the cultural festival?

How To Get A Guy: Sorted By Blood Type

Megumi-kun is a hygiene freak, but it doesn't stop Naho from admiring him. She even volunteered herself to help Megumi-kun overcome his flaw since he has to meet his future fiancee within two weeks time. Will everything be okay for the two of them?!

It's about the relationship between a teacher and student. How will their love go and end?

Kaya meets her younger childhood friend Reo for the first time in many years. But what happens when she is made a fool of by the mature-looking Reo!?

Hitomi is about to change schools, and before she does, she wants to go out with a bang at the cultural festival. Will committee chair Matsunaga-kun help?

High school girl Chihiro is, in fact, a shoujo manga author! She bases her manga on her wild ideas with her first boyfriend, Izumi-kun, but she's keeping it a secret from him...?

Riri is a "good girl" and model student so when she gets slapped by Shiyuugou's girlfriend for going to a hotel with him, she's quite surprised. As their chance meetings evolve into more of a relationship than they could have ever dreamed of, Riri finds herself falling for a man with secrets that could destroy them.