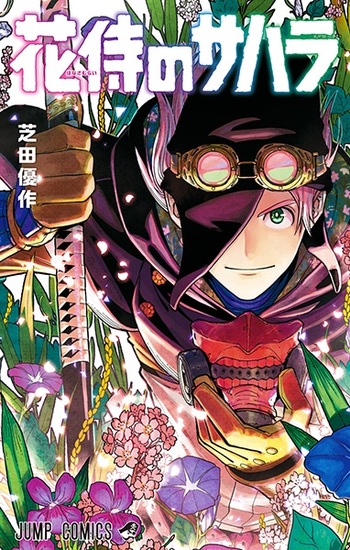 One of the first published works by famed Berserk mangaka, Miura Kentaro. It follows the heroic lone wolf, Noa, in a desert-punk post-apocalypse.

In a world that has become 70% harsh desert, the Rainbow Council of the International Peace Keeping Forces, a team of super-powered global security guardians, have a growing crisis on their hands. No. 5, one of their own and known within the council as their top marksman, has left his post and gone rogue. It's up to the other guardians to track him down--but No. 5, with his mysterious companion Matroshka, won't go down without a fight

Mankind brought about their own destruction... And now they have a second chance. Eve is there to record everything that happens in her Novan Report.

Earth has become a dried-up wasteland, and thanks to dwindling supplies and no more potable water, mankind will soon become extinct. In this desolate place, two travellers wander the landscape, documenting what’s left of humanity to leave a record for a future generation...

In the future, a man roams through the desolate wastelands. His enemies whisper his name with fear and awe: the "Demon of the Sands". Using his skills and ingenuity, as well as having a mind for tricks, he has a perfect record as a bounty hunter. Yet, he is still a man, and may have finally met his match in the beautiful and very well endowed Asagiri Junko. Now, he must learn to deal with the the harsh climate, hapless outlaws, and his complete weakness for the opposite sex!

In the not-too-distant future, our planet becomes a wasteland covered by sand—the world is like a dry, lifeless stone. Civilization is without hope. Awesome and terrifying creatures scour the sand, searching for food and facing off against the few human survivors. Gigi is a mysterious girl with the power to see through the sand sea. Her tribe has endured against the great sand whales, but the hunt has turned dry of late and things are looking bleak. In her hardscrabble search for survival, Gigi meets the pirate Sabu on the sand sea. The future of their peoples—and the success of their quest for something to believe in—just may depend on these two...

Rick has lived a normal life as a mechanic's apprentice in a world underground. That, however, is about to change as he bumps into a strange intruder who is not quite like anyone Rick has ever seen before. Venus, the intruder, claims to be from another world just like Rick's, though slightly different. With the police after Venus, can they figure out what is going on?

Scientists predicted an imminent meteor impact on Earth that would annihilate civilization, but contrary to their prediction, the meteor missed Earth. Though avoiding immediate destruction, humanity found that the meteor left behind something in its wake, something that would change the course of civilization forever: a new form of bacteria that ate through all known metals. Facing this new era where all metals turn to ash, Jinkichi and his classmates will have to survive with little help from the Japanese government. Some of his classmates have already begun to understand that the norms of the past have collapsed, and lawlessness will be the new law. Jinkichi will have to protect himself as well as his classmates from the violence that ensues.