Hana-Kimi: For You in Full Blossom 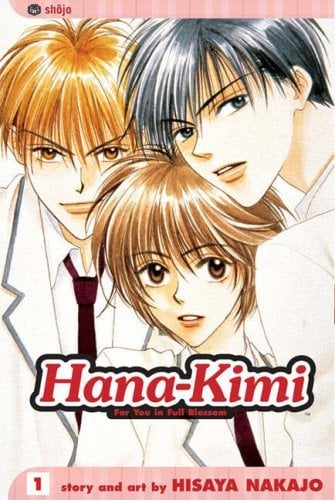 This shoujo manga from Hisaya Nakajo details the gender-bending journey of Mizuki Ashiya, who, to follow her idol - famous high jumper Izumi Sano - chooses to cut off her hair and enrol into the all-boys school Osaka High. I had my reservations as to how strongly the premise of 'just because she wanted to be near him' would hold up under the pressure of changing an entire identity and maintaining a façade to successfully fool a an entire school for THREE WHOLE YEARS. Firstly, would this maintaining a convincing image be sustainable without pushing the boundaries of believability? And secondly, how would a 23-volume manga maintain interest and progression with such a pivotal centrepoint to the story and the outcomes for Mizuki?

Well, I must say that Nakajo has done exceedingly well to pull this series off - and so well! I greatly enjoyed the story, and was pleased to note that the concessions for those who 'must know' of her real gender for certain essential things to occur (e.g. her obtaining basics like tampons) and also to build the network of support for her character, her journey and her secret were made with relatively seamless plausibility. It also turns out that there is indeed plenty that can keep a 23-volume series going in the right direction with the main character maintaining such a profound deception. The usual thrills, spills and even some complex paradigms between Mizuki and the two main male characters, Izumi and their best friend and classmate Shuichi Nakatsu (a Kansai lad with a lovely subtle appeal and pivotal role in the story).

Without dissecting the plot and risking spoilers, the story progresses nicely and with plenty of intrigue, variety and shifts in central focus in aiding character development. There were a few repetitive features, like the prevalence of the acceptance of 'beauty' in boys - which might indeed be more acceptable in Japan, I don't know - and this element consistently causing fresh concerns and near-misses for Mizuki. But these elements are carried with plausibility while also facilitating progression in the plot, so I wouldn't chalk it down as a negative factor.

Nakajo's art is distinct and her characterisations and backgrounds are pleasantly unique, 'clean' and aesthetically appealing. The underlying theme of flowers with her portrayal of the characters (particularly Mizuki) which she expands on in the discussion panels throughout the series are a nice touch. This feature especially interesting given that she only utilises the personification of flowers in connection to characters in their 'profiles' in the discussion panels, and on the chapter and volume covers. But they work surprisingly well in subtly informing the reader's image of the character anyway. It adds a bit of a novel layer in the method of characterisation and character development.

Predictably, the characters make the story as good as it is. Nakajo obviously focuses heavily upon Mizuki and Izumi's agonizing relationship development. All with the intrigues and results of miscommunication, lack of communication, and of course, the immensity of Mizuki's 'big secret', all proving the catalyst within their fragile, invisibly passionate relationship. This is all highlighted most keenly in the profound, often selfless impact that each has on the other's life. As mentioned, Nakatsu proves to be a point of interest and conflict with his relationship with Izumi also examined and tested by the bravery of honesty. The wider base of characters are paid due mind, also, which helped to keep the story fresh and the characters intriguing and relevant to the friendship group's individual development and also within the maturation of friendships among them. Even the more negative aspects of the schoolyard world were proportionately represented, which was a good, subtle anchor in reality, as well as being utilised as a useful plot device.

By the end of the series, I breathed a HUGE sigh of relief with how impressively well Nakajo's work throughout the series building bonds between the characters, and most pointedly, the bonds between the characters and Mizuki, worked with the ending. It was almost enough to bring a tear to the eye, and I felt pleasantly sated with both the plausibility and the demonstration of the story's journey. It certainly left a positive taste, which will endure most strongly with my positive opinion of the series!

A gender-bending shoujo with plenty of schoolyard-and-beyond twists, trysts and turns - even touching on more adult / mature branches of character interaction to keep perspective and fresh interest. I would obviously highly recommend this to any fans of shoujo, romance, comedy, school-life and gender-bending story elements, but I'd also recommend this to anyone looking for a light, amusing romatically-inclined series to take a cool, refreshing dip in. 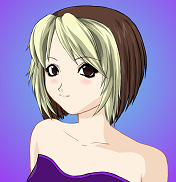 If I were to be perfectly honest, I didn't expect much when I began reading this series.  The idea of a single girl in an all-boys environment, or vice-versa, is a commonly used one in manga, and so I figured that this one would be no different from any of the others.  I am happy to say that I was pleasantly surprised!

The story begins with Ashiya Mizuki, a girl raised in America who has come to greatly admire a high-jumper by the name of Sano Izumi.  So, following her feelings of admiration, she moves to Japan and begins attending Ohsaka High School, which happens to be an all-boys school.  For this reason she disguises herself as an effeminate boy.

The rest of the manga follows this sporty, naive, adorable girl throughout her time at Ohsaka.  It outlines the relationships that she builds, romantic and otherwise, and doesn't have a single dull moment.

The character development is no less than fantastic.  Throughout the story you see how everyone around Mizuki changes, how their feelings mature and their outlooks reflect this new found maturity.

The art work went through a similar metamorphosis.  The beginning of the series featured a fairly typical older style of art work, which I felt didn't fit the story.  However, by the end of the series I quite enjoyed the art style as it became more refined as each page passed.

But I will admit that this story wasn't perfect.  In fact, I could name quite a few flaws.  First of all, in the first couple of chapters Mizuki is discovered to be extremely athletic, and is initially chased by many of the sports clubs in a bid to get her to join them.  However, after maybe 3 chapters of this, the entire of idea of Mizuki being asked to join athletic clubs is completely forgotten.

There is also the matter of untied ends.  Many of the characters that one might think to be important had absolutely no closure in the series.  They seemed to simply dissolve from existence.  Same with some major events that was seemingly swept under the proverbial rug, never to be seen again.

Despite the flaws, I consider Hana-Kimi to be more than worth reading.  I know that I don't regret my time spent with it.  I will definitely be looking for more mangas like this one!

Years ago I started to read this manga. My friends on high school told me it was a good story and so I started. Back then I didn’t know much about manga or anime. I thought it was a fun story, but for some reason I didn’t finish it.

Just some days ago I started to think ‘did I ever finish reading the story?’ I couldn’t remember a thing so I thought let’s start reading it again. Hanazakari no Kimitachi e was one of the first mangas I first started and soon after I started reading it again I found out I never read it that far. A shame, but true. Years after that I started to like manga and anime, I finaly finished this manga.

The story was fun. A girl, totally in love, transferring an all boy’s school at the other side of the world. Romantic, you could say, but mostly totally naïve. The first 120 chapters were about the relationship between Mizuki and Sano. When the truth about her being a girl came clear, the story style changed and suddenly I found myself in tears behind my screen at the last chapter of the story, wishing it wouldn’t be that sad.

Though I normally hate girls in anime and manga, I really am in fond of Mizuki. She’s a person that could be my best friend. A lot of her characteristics are like mine. I recognized myself in her and that made me fall in love with Sano too. They’re just a dream couple, I can’t say differently. There isn’t a single character I don’t like within this manga. When I thought ‘ew that’s not a nice person’ it turned out to be a good guy. None could ever hate Mizuki and because of that they all became friends with her, making me unable to hate even one of them. That’s quite special if you ask me, because even within my list of most favorite manga [I’ll pin this one on it too!] there always is one person I hate. All I could do here was love, love and… love.

The way the mangaka painted the manga was nice too. It’s a different style than manga these days but in its own way it’s a nice style. 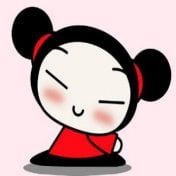 This was my all time favourite since I read it! I was funny. cute, admirable, and most of all-- it makes sense!