Hana-Kimi: For You in Full Blossom - After Story 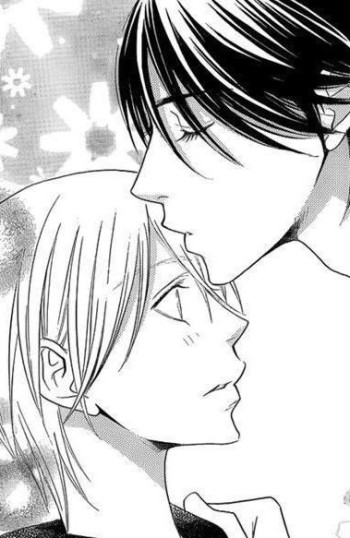 If you're looking for manga similar to Hana-Kimi: For You in Full Blossom - After Story, you might like these titles.

Serena has been head-over-heels in love with her childhood friend Kacchan (Kazuya), who's one year younger than her, for 10 years!! She's been working hard this entire time to make herself the kind of woman Kacchan would like, and now she's brimming with fighting spirit! But she's so afraid he'll reject her that she hasn't made a confession yet, even to this day. She wants to be close to him, but she can't manage to do more than just joke around with him. What will become of Serena and her wish for love!?

The guy who helped Mari, could he be Mari's ideal man?! Mari is super excited to have finally found her Prince Charming, but this guy, Chiaki, unfortunately has a dual personality! Due to some family circumstances, they start living together, when his mischievous personality appears and unfortunately snatches Mari's first kiss! Who is that man? What has she given him?!

Saki, an ordinary 14-year-old girl is very stingy and loves money. One day after her parents and little sister and brother mysteriously disappear, she finds 2 guys at her door. According to the handsome one, Takumi, her father lost his job a long time ago, and had incurred massive debts at Takumi's firm. In exchange for saving Saki from a loanshark, Takumi asks her to work for him, to pay of her father's debt. What's a desperate girl to do? go work of course!

Honda Moe just transferred to Todo Gakuen, but no one bothered telling her she'd be the only girl student! Lucky for her, Himuro Kyo, her childhood playmate, is also in her class. But why's he being such a jerk and pretending he doesn't know her? Moe's gotta be creative and use her wits if she wants to survive the new schoolyear with her virtue intact. Who's gonna protect the lone princess, from a school full of wolves?

Kanako is the resident class outsider. She has no friends, and her classmates talk about her behind her back calling her a "downer." However, she wasn't always like this. Back in elementary school, she was a cheerful, outgoing girl who loved to smile. This all came to an end one day when Eiji, the younger brother of her school tutor and a classmate of hers, told her that she looked ugly when she smiled. Even though he moved away soon after, she took his insult to heart and it's been two years since anyone's seen her smile. Now that Eiji's back in town, what will become of her?!

Even though she loves singing, due to fear of her older brother's disapproval, all Nonoko Sugisaki can do today is wish on a shooting star. But then, Kenji and Mikki, who hear Nonoko singing, decide to ask her to join their band...?

Oto Tachibana, a 17-year-old, good-natured and caring girl, decides to earn her own school fees from now on, so she takes a job at her new school as a dormitory maid for "Class Z," an elitist class full of people with special talents. As such, she starts her new life away from her family in the dormitory, surrounded by (mainly) boys that are all a little different. Among them is Jin, the dormitory head, a boy who is amazingly strong and who keeps a "cuddly" pet at the dormitory's swimming pool - a pet shark!

It is the story of Tachibana Oto, a ditzy girl who works at the Class Z dormitory as a maid to earn her school tuition. On her way to the dorm, she bumps into a gang of fighting people. When she interferes to break up the fighting, she was pushed around. A mysterious stranger, with GOD tattooed on his arm and a partly-dyed fringe, timely comes to her rescue. He turns out to be Goryukanda Jin, dormitory head of Class Z, the people considered elite to others because of the various talents they hold.

Her entire family likes them. Her friends like them, all the girls she knows likes them... but to Suguri, sweets are the worst! Just the mere smell of them induces her to vomit! So what is she supposed to do when she discovers that her crush, Murakami Ken, who supposedly hates them, is obsessed with them? He begs her not to tell anyone of his secret infatuation with sweets because it would ruin his 'manly' image and she agrees as long as he lets her work with him at the famous Igloo Bakery! Love sparks, rivals appear! See how Suguri overcomes her sugary malice in A Love for Sweet Things!

Ruho Miyatsuki wants to fall in love, but she is totally unable to! One day she discovers a club that will help girls with any problem. There she meets three hot guys... Will she be able to be cured and find her prince?