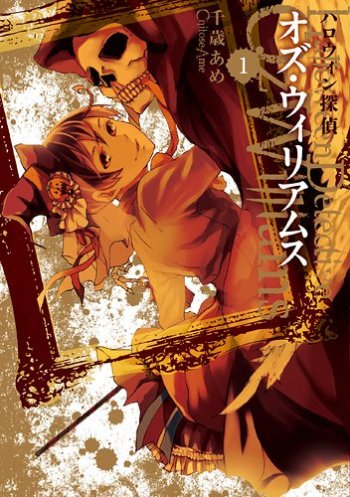 In 19th Century England, during the Victorian Era, there is the Kingdom of Tarnina Ulaniborg. The Kingdom has a Royal Academy where Royalty and Commoners can study Astronomical Research in hopes of becoming a Royal Astronomer. Astel Paschalis attends the Royal Academy as a scholarship student with a certain hidden motive.

Black-Haired Kerry and the Casebook of Romantic Troubles

In the nineteenth century, Kerry pretends to be a man and helps the powerless as a detective in London, though she's from an aristocratic family. She takes an assignment involving a stolen diamond for a couple who's facing their parents' objection. The man standing in front of her is Hohen, family lawyer with sharp stares. They're at odds against each other at first, but as they cooperate to solve the case, they become attracted to each other...?!

British Empire under the reign of Queen Victoria in the 19th century. The stage is "Bray Rock Antique Store" like a graveyard, with a store in one corner of Imperial City London. Inside the store, there is a brooding young store owner "Bray Rock" and an innocent girl "Rila" who knows nothing. “Nancy,” a flower seller who visits the store every day to deliver flowers, touches the mystery of “Lilith,” the first witch of mankind, hidden behind the store one day!

Impulsive Marianne Dashwood and cautious Elinor are as different as two sisters could be, yet both are shattered by their father's sudden death. Elinor's attachment to the reserved Edward Ferrars is torn asunder by family opposition and his own dark secret, while Marianne's brilliant romance with the dashing John Willoughby comes to a tumultuous end in a devastating public betrayal. Can the two sisters overcome these trials to find true, lasting happiness?

The life of a spinster in Victorian London isn't an easy one on the best of days, but such a life becomes infinitely more complicated when said spinster is "soulless" - a preternatural bridging the gap between the natural and supernatural worlds. Miss Alexia Tarabotti has this unique distinction, and when she is assailed at a formal gathering by a rove vampire, an encounter that results in the death of the half-starved creature, her circumstances become exponentially more complicated indeed! Now caught up in an intrigue with life or death stakes, Alexia must rely on all her talents to outmatch the forces conspiring against her, but it may be the man who has caught her eye - Lord Conall Maccon - and their budding flirtation that truly drives her to her wit's end!