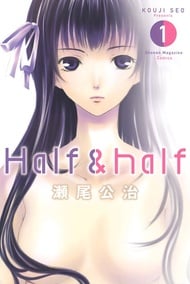 Nagakawa Shinichi and Sanada Yuuki both get involved in an accident and die together, but they are given a chance to live again. A voice lets them survive for seven more days. However, after the time limit, one of the two must die again.Also, their lives will be shared, including emotions (guilt) and physical sensations (pain). They are told not to leave the other's side, else both of them will die. Now, with each of them wanting to save his/her own life, how will the next seven days of non-separation be like? Will they get along?

Half & Half is a great dramatic romance manga. If you're looking for a quality but also short read, this is definitely something you might want to pick up. I have one important suggestion for you: depending on where you read Half & Half from, you might find a chapter 0 which is NOT a prologue, but it's the original one-shot from 1996 written and drawn by the same mangaka. They're very similar, you might also call this one the extended version with a different ending. If you want to really enjoy this read, skip ch0 and go to ch1 right away. Plus/minus considerations: STORY: the two protagonists get involved in an accident and die together. They somehow realize they're still alive, but a voice will warn them that only one of them can still live and they will need to choose which one within 7 days. This story is something different and original from your usual read, what I really like is the fact that they have a set amount to time to decide (if they want to believe that, of course), adding a great psychological aspect to the deal. Not only that, the way the author made the two characters interact is fantastic. I made the mistake to read ch0 (the one-shot I was talking about) before the remake, so it ruined a lot of things for me, especially the ending (I had some expectations, unfortunately). I feel like the ending from the OS is slightly better, but I enjoyed this one nevertheless. (++) ART: this manga looks great compared to the previous version. It's really clean, the panels are well distributed allowing you to see and feel characters' expressions; also there's a good balance between drawings and dialogues. Facial features are a bit off sometimes, but nobody is perfect. (++) CHARACTERS: best part about the manga hands down. Characters are dynamic: they grow in better page after page not only individually, but also as a couple. They share emotions in a unique way creating the bond that makes this manga great. (+++) What really makes this manga great for me is the remote possibility that something like this (not involving the supernatural element of course) might happen to me and I would have to make a difficult choice that could cost my life, it makes you think a lot. Strongly recommended.

I don't normally read romance manga, but the synopsis intrigued me and I had read the one-shot already so I decided to give it a go. And boy, was I happy that I did. Story The story starts with a normal guy who dies because of an accident, which also killed a girl. He is then brought to a kind of limbo, where he mysterious voice tells them that he will let one person live as the other dies. They get one week to decide who lives and who dies, and in this week they cannot leave the other's side. Back in the normal world, they notice that even their physical and emotional feelings are shared... man, God is a cruel person... Now, as they can't kill each other, can't leave each other, and even get  a peak inside the other's head by feeling the same emotions, they need to decide who lives and who dies. It's a relatively simple recipe for a great manga. A tragedy, with a certain beauty to it that I didn't expect before starting it. Characters Because they are inseparable now, we are shown a lot of things about the lives of the two, so the reader will be very attached to the characters before, inevitably, one has to die. Of course, for this to work, the characters have to be very well fleshed out, interesting and amicable. Which is something that has succeeded perfectly well: the characters are all the things they have to be, and more. They are as human as actual humans, or at least it feels that way. The best proof I can give for this is the fact that I actually cried at the ending, which doesn't happen too often... The decision they had to make would break anyone's heart (unless you are a person who doesn't know what a heart is). One could argue that this manga is very short, and that that would mean for most people that you can't get attached to the characters properly. One would be wrong. It's been proven countless times already that you don't need a lengthy story to get attached to characters - if you don't believe me, try watching shorts like Furiko or La Maison en Petits cubes: both are short, yet powerful. If a story gets to the core in a decent way, it doesn't really matter how long it takes. Or at least, that's my opinion. Art The artwork was good too, nothing too fancy but good... (man, I really need to find better ways to describe art...) Overall: It's a great, relatively short romance manga. Especially the characters were very well done.

i always think that making review is kind of boring cause no one read them xD (in general) But i couldn't help it this story is amazing in someway xD first of all i realy get mad of all the sex matters (i mean we search for drama not sex ...) (i look like a fool but  i mean it) Spoiler ahead Sec : the characters are really awesome Especially the two mains characters in a first glance i was thinking that they are just two Boring characters but when i see what they live in the moment i've really moved they (xD that was lie but its really interesting story about the two) third : the fact that one of them have to die sharing the same essence and soul is a good think but its weird that they shar even the sentiment this was unnecessary xD (that what i was thinking in the first) but it turn a good think after all Forth : and finnaly the ending was amaaaaazing :) that why i give this manga 8/10 Thanks you for reading Bye xD 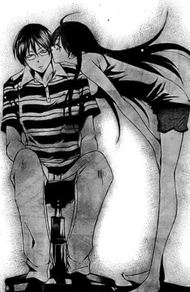