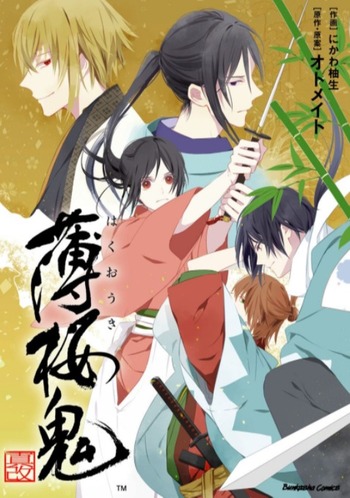 Hakuouki: Dawn of the Shinsengumi

The beginning of Hakuouki series, this installment tells the story of Ryunosuke Ibuki, a boy who loathes samurai while also being the son of a samurai. After being robbed and left to die on his way to Kyoto, Ryunosuke is rescued by the Roshigumi leader, Kamo Serizawa. Serizawa treats Ryunousuke as a servant and calls him a dog. Meanwhile, Ryunousuke watches as the Roshigumi slowly unravels around him.

After being forced to flee to Edo, the Shinsengumi are disillusioned. Aside from the Shogun's behavior, they also face personal problems. Kondou is recovering from his gun wound, Okita is bedridden, Sanna slips into madness, and Hijikata fights to keep them together. No matter how dangerous the battle, there is no stepping down. As the flames of war threaten to engulf them, they must return to the battlefield once more or risk losing their lives in Hakuoki: Record of the Jade Blood.

The second chapter begins as Chizuru continues the search for her father while the Shinsengumi combat the dangerous beings lurking in Kyoto’s shadows. As Harada, Shinpachi, and Saito try to fight their way out of Koufu, Chizuru stands guard over Kondou. Meanwhile, Hijikata faces the greatest test of all and must now balance his humanity against a need for blood. Swords flash, heroes die and the fires of war, and passion, ignite!