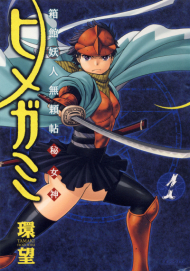 The time is the Meiji era, and the location is the well-travelled town Hakodate, where a young girl named Hyou works as a bodyguard for the titillating girls of Cabaret Butterfly. But secretly Hyou hides a dark secret: she was tasked by her father, the famed Shinsengumi Toshizou Hijikata, with defeating the terrifying monsters that continuously invade the city. With enemies at every turn, can Hyou keep her friends safe, including her mysterious, busty new companion Himeka who hides her own secret?

338 users are tracking this. Log in to see stats.

Greetings fellow manga readers, it's RandomRedneck, once more branching into a manga review. And for this one, I tackle a manga I read because the TvTropes page said, "A very good yuri action series". What a load that was. I give you, Hakodate Youjin Buraichou Himegami(AKA Tales of the Hakodate Youjin Outlaws: Himegami.) Let us begin, shall we? STORY The story goes as such. Hijikata Hyou, a girl living in the small port town of Hakodate, is by night, the mysterious Youjin hunter, Miburo. She bears some kind of freaky mark on her back, indicating how many Youjin exist at any given time, and makes it her mission to kill them all. And after saving a girl, the incredibly annoying Himeka, one day, she receives assistance from the mysterious(And really tacky dressed) Himegami. From there, we learn of some plot about a demon seal or something like that, blah, blah, blah, who cares? The story pretty much turns into a mess after chapter two. ART Art is pretty meh actually. Nothing that's gonna wow you. An annoying part of said art, is that pretty much all the chicks are given "Barbie Doll Anatomy". As in, no nipples. Wouldn't really be an issue, except every 5 pages or so, the chicks find some way to be either topless, or just naked. And it's kinda hard to not notice them when that happens. CHARACTERS Lets see, characters. We have our heroine, Hyou, a really moody bitch, who loves to whine about stuff every five pages, Himeka, apparently a much dumber, more annoying ancestor of Orihime from Bleach, except when she's Himegami(Oh yeah, she's Himegami. It's pretty obvious after about...half a page). And some French chick bad guy named Gwain. She's not a really impressive villain actually. We also have the police captain, and three other chicks who like dressing like slut ninjas too, but really, who cares? OVERALL Save your time, and avoid this manga. Cliche, cheesy, bad characters, a crappy ending, mediocre art, and no actual yuri. Yeah, it never gets past flirting and hand holding. That is all. Thank you. Yours truly, RandomRedneck.