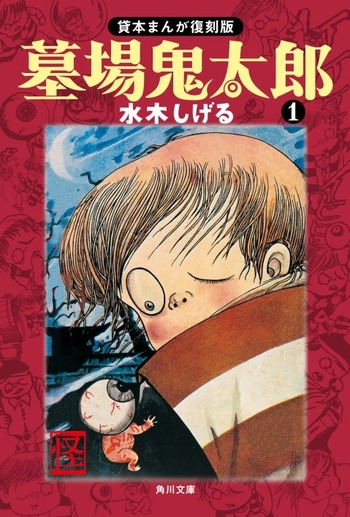 About to start a new chapter in his life as a college freshman in Tokyo and trying to find an apartment to stay in, Mijou Kanata comes across real estate broker Nekome Jirou, who informs him of a special property in the Yuurakuchou district: a room with its own kitchen and toilet, and a monthly rent of 40,000 yen. Surprised by the relatively cheap rent (by Tokyo standards), Kanata signs on the rental agreement and is ushered to the property by Jirou. However, instead of the lively yet congenial district in Tokyo that he was expecting, Kanata is taken to a different Yuurakuchou: a town where ayakashi walk the streets, a place that sits between this world and the next…

A former professor of archaeology, Hieda Reijiro was expelled from the Japanese Archaeological Association for claiming that yokai exist. Ancient horrors come to life before our eyes as the yokai hunter wanders the land to find proof for his theory!

Tamami-san is a bakeneko, an immortal cat-human, seeking revenge on all the descendants, to the seventh generation, of the man who scarred her for life. But to hunt down those descendants, she needs money. For money, she needs a job. Days in the office, nights out hunting. No wonder she can't stay awake!

There's an old legend that a monk and a Tengu is rival. Kiyomi is a monk who was saved by a girl named Sasuka. While staying there, he found out that there were girls who went missing. Villagers think the culprit is a Tengu. Is the Tengu really culprit? And somehow it seems that Sasuka relates with Tengu. And somehow Kiyomi is just a fake monk?