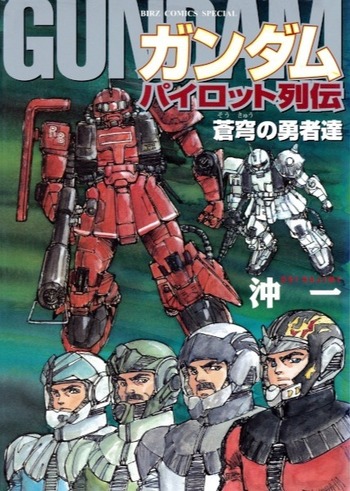 If you're looking for anime similar to Gundam Pilot Retsuden: Soukyuu no Yuusha-tachi, you might like these titles.

Turn A Gundam I: Earth Light

The year is C.C. 2345. Growing tensions between the Earthrace and Moonrace have spiraled into an all out war. Mankind's only hope for peace lies with a young Moonrace boy named Loran Cehack, and his mysterious Turn-A Gundam, a relic of a dark history which nearly destroyed the Earth centuries ago. As a citizen of the moon, Loran is loyal to the beautiful Queen Dianna Soreil, all the while fighting to keep the technologically superior Moonrace at bay as the pre-industrial Earthrace tries desperately to catch up.

Following the events of the first movie, the Militia finishes restoration work on its excavated spaceship and travels to the moon to deal with Gym Ghingnham and Agrippa Maintainer, who along with Dianna Soreil form a governing triumvirate over the Moonrace. On the moon, the political situation rapidly evolves as new deals are made, setting the stage for a decisive final battle to determine the relationship between the people of Earth and the technologically advanced Moonrace.