Guardians of the Louvre 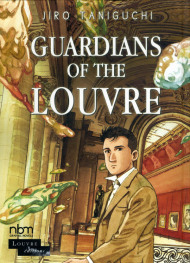 After a group trip to Europe, a Japanese artist stops in Paris alone, intent on visiting the museums of the capital. But, bedridden in his hotel room with fever, he faces the absolute solitude of one suffering in a foreign land, deprived of any immediate or familiar recourse. When the fever breaks somewhat, he sets out on his visit and promptly gets lost in the crowded halls of the Louvre. Very soon, he discovers many unsuspected facets to this world in a museum in a journey oscillating between feverish hallucination and reality, actually able to speak with famous painters from various periods of history, led to crossroads between human and personal history by... the Guardians of the Louvre.

117 users are tracking this. Log in to see stats.

Guardians of the Louvre is part of the Louvre series of bande dessinée, a long-running series of full-color comics comissioned by that museum. Like other comics in this series, the Louvre and its artworks are featured prominently. However, despite its French-style presentation, this work is also a manga-- it is written in the standard right-to-left format, and adheres to other standards of Japanese-style storytelling, particularly in terms of its pacing and emphasis on setting. The tale concerns an unnamed Japanese artist who, during a visit to Paris, finds himself bedridden with a cold and fever. Upon feeling a little better the next day, he goes out to visit some mueums, starting with the Louvre. However, he starts feeling unwell again and soon finds himself in a dreamlike state with a self-described Guardian of the Louvre at his side. Over the next few days, he visits the Louvre and sites related to famous artists through this "space-time in [his] reveries", going back in time and even meeting said artists. I won't spoil who these artists are, except to say that nearly all of them have a special connection to Japanese art and art history. The nameless main character is given only enough personality to move the plot along; he mainly serves as a conduit through which the reader learns about and appreciates the art being discussed. We do learn about a specific, important detail in his life at the very end, which, though it arrives unexpectedly, serves as a neat and tidy way to help conclude the story. As for the other characters, the Guardian mainly serves as a guide, and the historical figures feel believeable enough. This was my first time reading something by the late Jiro Taniguchi, and his reputation is well-deserved. The pacing is tranquil, and the art is detailed and refined. I particularly enjoyed how various masterpieces of European art were recreated and woven into the story, and his renderings of the Louvre's interiors are gorgeous. While not a masterpiece itself, Guardians of the Louvre is a lovely slice of European art appreciation and history, as seen through a Japanese perspective. Although some of the information presented wasn't new to me, most of it was, and as such, I found it quite educational. It's also beautiful to look at, and very much worth your time if you're an art lover.