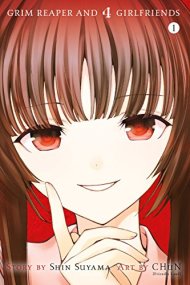 Kaoru Minaguchi is a "no-lifer" who sucks at school, can't play sports, lacks any real talent, definitely doesn't have a girlfriend, or even a remote desire to change any of the above...until a certain grim reaper pays him a visit. Turns out, she's a reaper of "no-lifers" and if Kaoru can't find a way to become a true "real-lifer," he's as good as dead...! In an effort to stay alive and increase his odds of landing a girlfriend, Kaoru sends love letters to four different girls in school...only for all of them to say yes! But if anyone finds out about his four-timing, he'll be back to being a "no-lifer" and, worse yet, back to imminent death! Forget romantic comedies--this one's a thriller!!

909 users are tracking this. Log in to see stats.

The series is about a No-lifer boy who meets 1 of the grim reapers. A middle schooler looking girl (because Japan), who intends to take his soul since he's a no lifer there will be no one missing him. Even though he has parents and since no depraved backstory was shown I'm gonna presume they are decent parents. So to convince the grim reaper to not take his life he tells her that he is going to be a lifer as he intended to confess to a girl. The Grim Reaper backs off but says she'll give him 1 day to change his life around. So the male lead confesses to the girl of his supposed dreams and to his surprise she says yes. All Four of them. In his hasty attempt to save his own skin he left a love letter to 4 girls but all of them have said yes. Now he needs to keep there relationship a secret and he can't break up with one of them as undoubtedly rumors would spread reaching the girls he is currently dating. Now he needs to keep this up for 3 months (The time limit the Grim Reaper has set) but what is 1 guy who hasn't had a single friend much less a girlfriend supposed to do. The series is surprisingly fine despite the relative serious tone and demeanor. The idea is that he could die at any time but there is a lot of great meme material to be had here. Mostly because anytime more than 1 girl shows up he pisses his pants and needs to deal with this situation. Which was very funny to see. The comedy was actually one of the stronger points in the series. It wasn't excessive but there was still quite a lot of it without it feeling the author had no way of dealing with serious issues so he just threw a bunch of jokes (which usually works for some reason). The manga felt well paced in that regard. All the characters were incredibly wacky in there own fun regard. One's Horny, one's sadistic, one's a tsundere, the other is a yandere. They all have these ridiculous stereotypes while also being funny. The yandere especially was both terrifying and adorable. Which i guess fulfills the category Yandere. The male lead was also quite enjoyable to watch. Mostly to see how to get out of these insane situations. Part of the fun was the fact that he was a big shoujo lover yet become a harem character. He became the thing he swore to destroy. His self depreciation jokes and personality were spot-on and I liked that part about it. Another thing the series did well was the actual romance part about. It did step forward in the romantic element. Don't get me wrong he is a scumbag (though with understandable reasons) but at least the author actually took that step. Its quite sad this series was axed. The ending is really bad. Overly rushed as it were. It took a lot of the right steps and it looked it was gonna become something special. Yet it just kinda ends and feels bland. I didn't like how they resolved everything. Mostly because they don't explain jack-shit. Though the first twist was good. TLDR: Steps in the right direction but the quick axe leaves a lot to be desired. 6/10

*This review contains spoilers* This was a fun read. It's a bit cheesy, and some of the stuff seems kind of convoluted for the sake of plot, but it was entertaining, and though the ending was what I expected, I was happy with it and it ended the way I hoped it would.The synopsis is that in this world, grim reapers are to eliminate those who are "failures". Failures are those with no plan or without any contribution in society. Kaoru Minaguchi, a middle school student, is one such failure, and as such, he encountered a grim reaper named Airi. After some initial small talk, Airi reveals her true intentions, and after asking Kaori if he deems himself a failure, once he answers yes, she stabs him with a scythe. Kaoru saves himself by declaring he has fallen in love and has a girlfriend. It turns out he sent love letters to 4 random girls he knew the full name of at his school. Thus begins our story, and the adventures and wacky ways Koaru tried to keep up his "quadruple-timing".As the manga goes on, the situations get more and more complex between Kaoru and the 4 girls. He's able to keep the relationships hidden between the girls, and Airi plays along, posing as his "little sister". From hanging out with the girls indivudually, to going to the mall, to encountering all of them at the culture festival, Koaru manages to juggle the 4 relationships despite some close encounters. However, he also learns late on that one of ther girls is also being followed by a grim reaper, and has been given one week to kiss a boy, or else she'll die.For about 3-4 chapters, Koaru tries to figure out which girl is in this predicament. Oops, I should probably mention the 4 girls and who they are. You have Aoi who is the athletic girl, Emiri who is the gamer girl, Risa who is on the student council, and Yui who is an idol. This who aspect was kind of thrown in out of nowhere (by the way, the grim reaper targeting the girl is Airi's older sister), but it was fun reading Koaru's attempts to figure out the mystery. I won't spoil which girl it was. but let's just say once that mystery is solved, that's not the ending.The ending involves a surprise with Airi, though admittedly I expected it. In the end though, I was hoping Airi would have a happy ending, and well *spoiler* she got one. She turned out to never be the evil grim reaper she portrayed herself as, and let's just say she had a hand in setting up a lot of the events. All in all, a cheesy but fun storyline with an ending that left me happy. I'll give it a good score.The art is fine. Not much to say about that category.The characters were cool as well. I didn't like Airi at first, but she eventually became my favorite character. The rest of the cast was solid.All in all, I would recommend this. It's a fun read, it took me only a day to get through and it was worth spending part of the day reading this. I was happy with the ending, and the journey up to that point was solid.

I was reminded of the scenes in Charlie Chaplin's movie Monsieur Verdoux where fe was scrambling to juggle multiple romantic relationships while the girls were in close proximity. In fact, the tension (and a lot of the humor) from this story is dependent on Kaoru Minaguchi entering situations where several of feir girlfriends are around and there is a risk of feir four-timing being discovered. Some of these moments are just coincidence, but many of them are the results of grim reaper scheming. We get to know the girls over time and they each have at least one moment where they bear their souls and show their vulnerabilities to Minaguchi. Yui is an idol and has a slight sadistic side. Risa is the student council president and has an obsession with sexuality and libidos. Emiri is the daughter of a politician and has a nontalkative personality and a love for video games. Aoi is the ace of the swimming club and has yandere tendencies. And finally, Airi is the grim reaper and has a love for anime culture. Each of these girls grow to genuinely like Minaguchi, even if they might not have in the beginning. Yui's arc is probably the most interesting, and Emiri's arc probably the least. Artwise, the characters can feel stiff and the backgrounds simplistic. I didn't find Aoi and Yui's character designs to be distinct enough from each other.