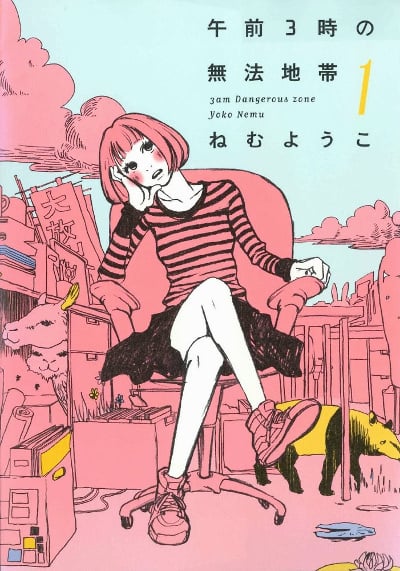 Yes yes, Gozen 3-ji is not yaoi, BUT th efirst thing I thought of when reading Gozen was "oooh, just like Sekaiichi Hatsukoi." WHY you ask? Well, the awful working situations that the main characters suffer at the beginning of their jobs that almost makes them quit exists in both mangas. Also, the "demeaning" nature of the work they do: pachinko design and manga editing. The ridiculous overtime and overnight stays at the office b/c of crunch time are also the same.

In both Gozen and Sekaiichi there are so so sooo many little hilarious moments when the main characters are like "wow, this is my life now. This office and the people in it are flipping crazy, but I'm still sticking it out and I have no idea why..." You can tell that both senseis had a ton of fun incorporating their sucky experiences as mangakas under time constraints  and making these experiences funny to outsiders through their works.

In conclusion: READ BOTH OF THESE MANGAS! If you liked one's style of humor I'm pretty sure that you'll enjoy the other.

At twenty-seven years old, Minami has a decent life. She’s a successful employee at a large advertising firm and has a boyfriend of seven years. But when the two break up, Minami finds her once-stable situation crumbling around her. Crushed and withdrawn from being alone, she soon finds herself involved with two men from her company – the likeminded, heartbroken Ogiwara and younger peer Ishida. Through difficult jobs at work, first dates and bitter rivalries, Minami will learn that love is never easy.

More josei manga about mid-20s office ladies with extremely stressful jobs, ridiculous co-workers, a bit of romance, and some introspection. 3 AM Dangerous Zone is rather more upbeat, but both will definitely appeal to the same audience.

Kanna is an office lady who is at a critical point in her career. For some reason, she is assigned to receive training from the dull and plain Haruki...?

Choko Kuze is the sensible daughter of a venerable family who went bankrupt. She joins a real estate company as an entry-level office worker, but her eccentric boss is harder on her than anyone else in the company! After hearing him inadvertently call her "milady," she realizes he was the young servant boy she knew as a child. At work he's a tyrant, but after hours he insists on treating her like a lady of the nobility. Is romance even possible for a couple locked in such a crazy role reversal?

Emi Yamanaka is an office lady working in Tokyo. She's brash, opinionated, smokes, and likes girls. Having gone through various failed relationships with other girls, she resigns herself to cynicism. Her equilibrium is shattered by the appearance of a new worker at her office, Taneda-san.

Adorable and super-talented Takase is the star secretary of his company! His reputation’s been built on his amazing ability to make anyone he works with a success…but what will happen when he’s assigned to the lazy son of the big boss? Can a prodigy improve the reputation of a handsome slacker? Good-looks and charisma go a long way in the workplace! It’s lots of fun to tackle meetings with the company’s best employee, but will a professional relationship cross the line once sweet, surprising feelings come to light?

Sakura Endou is a twenty-six-year-old shoujo mangaka who doesn't have time for a boyfriend. However, when her friend Misono takes her to a group blind date, Sakura meets a plastic surgeon named Iku with potential. That is, until he looks deep into her eyes, moves in for a kiss, and describes all of the plastic surgery options she should look into! Though irritated at his rudeness and arrogance, Sakura continues to date Iku and the two grow closer in time. Together, the two will face their pasts and embrace the present - each other.

Iwaya Sumire is a highly-educated, well-respected and young journalist at a major newspaper - though her social success can't stop her boyfriend of five years from dumping her for a less-educated woman. One day, as she's fuming over her lost relationship, Iwaya comes across a young man in desperate need for food. On a whim, she takes him to her home and feeds him, deciding to let him stay in exchange for becoming her "pet." With him at her side, Iwaya takes on love and life.