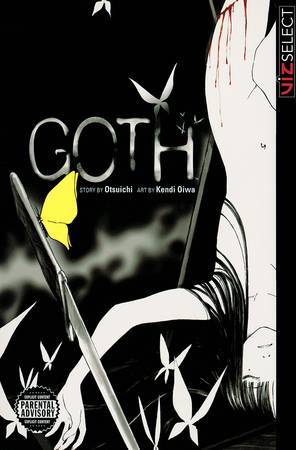 "Teenagers scare the living sh*t out of me/They couldn't care less, as long as someone will bleed/So darken your cloaks or strike a violent pose/Maybe they'll leave you alone, but not me!"

Yep, this is one of THOSE stories.

The two of them have an odd relationship. Do they want to kill each other, kill themselves, kill everyone else, burn the world down, or just be normal?

Heck if I know. The shortness of this manga doesn't really work to its advantage--the big explanation seems rushed. It's just disappointing, because other than that, the pacing could have been worse.

Art: Unlike many horror manga, the art of "Goth" is rather generic. Idealized looking characters drawn in typical manga fashion, meet standard backgrounds. I cannot praise the artist here, but at least her artwork isn't an eyesore. It's actually nice, but nothing groundbreaking. (Oh, and there is some blood, but less that you may expect. There is also some explicit nudity, but it isn't sexualized and it isn't the focus of the series.)

Screw the picture. This is an obscure manga; what do you expect?

Kamiyama Itsuki: He is a strange, strange boy. I like him, sure, but he's certainly weird. He is one of those rare "death otaku," and should probably see a psychiatrist. He's, however, almost a very subtle character. He neither idolizes women nor treats them like dirt. He neither tries to kill nor never associates himself with death. He's just... really freaking weird. (Or is he? o.o)

Morino Yoru: She, despite not seeming to have feelings for Itsuki, almost seems like putty in his hands. That, or she is really trusting. I can't really call her a strong character, but she has a nice (but hurried) backstory.

Everyone else: Really, Itsuki and Yoru carry this story by themselves. Everyone else is just a character (and yes, I know that there are no small parts, only small actors) and not much else.

Props to the mangaka for including a backstory in a short story, but most (save for Itsuki and maybe Yoru) characters are bland.

Overall: I'm a bit torn. I can't decide whether this is just a quick, easy read or an original and interesting manga. Hmm... well, I did enjoy reading it.

The first two chapters were pretty entertaining (I guess I would call them an 8/10), but the last three were noticeably worse. There are two things that changed:

The concept is interesting but poorly executed, the story is silly and the girl is portrayed as being stupid.