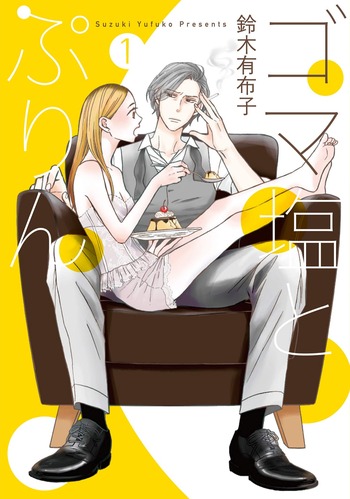 Life isn't going too well for Yuzuki. She's a 34-years-old and without a boyfriend. The elementary school she works at is close to firing her, and to top it off she doesn't know what to do with her life at all. But even when she quits her job and tries an arranged marriage, things don't work out. Only the bread she eats at the small stationery store around the corner gives her comfort. So one day, she asks the store owner to marry her on a whim, and to her surprise, he agrees...?

Similar vibe - if you liked Bread and Butter, you might like this one too. Both adult relationships, got married suddenly and developed their love little by little following that.

I'd say if you're not a fan of mature relationships then Bread and Butter might be the better choice, as Goma Shio to purin has that theme of sex and has more of a drama focus. But i liked that both male leads were level headed, and the female leads dedicated.

Is it love? Or is it admiration? The 20 year old ready for a pure love encounter!!

A woman in her twenties falling in love with a man in his forties or in the other case 39... Both are really cute romance stories...

Yuuka Fujita is 18 years old, and a high-school graduate. However she has not gone on to college like her high school classmates. Instead, her parents are trying to marry her off, sending her to way too many omiai meetings. This story begins with Yuuka refusing to go to another omiai. In her anger and haste, she literally knocks down her latest potential marriage partner. His name is Ryo Kusuru, and he is a college science professor at 36 years old. Their omiai meeting goes well enough however it doesn't look like much is settled at their first meeting. She does think Ryo is very handsome, despite him being a much older man. Ryo seems to like Yuuka well enough also, even though she is so much younger than himself. Meanwhile, Yuuka's parents keep sending her to more omiais with more men.

Shino, 30 years old, is an experienced woman both professionally and emotionally. But today, it is marriage that worries her and she wishes to find a partner who, like her, aspires to settle down. Only Mayuki, a young man nine years younger than her, declares his love to her and enters her life without warning! How can she resist so much spontaneity and fervor? Shino then decides to have a casual relationship with him until she finds the one who will meet her selection criteria...

Due to the Isurugi family's circumstances, Haru has to enter into a political marriage with his former girlfriend and childhood friend, Rio Tamaki. Living together under one roof, a dry life together for the sake of formality... though in actuality, the two have unresolved feelings for each other..."O-oh no... if he's this close to me... my feelings for Haru are still..." "There's no way I can let her find out that she still has a strong influence on me." While desperately pretending as if they've gotten over their feelings for each other, their awareness towards the other grows. A fake marriage where a former couple's love is gradually reignited. Watch as the vexing love comedy about the two's fake marriage life is interwoven.

This story is about a university student named Mikari who finds herself falling in love with the most unlikely of partners: Kaga-san, a 52 year old widower who lives in her apartment building. The scent of the incense sticks he burns in his deceased wife's honor clings to his body, drawing her in..

Aoishi Hanae is a 33-year-old woman who has a job, but no boyfriend. In fact, she's also still a virgin. It's not that she never had a chance to lose her virginity, but she let the chance pass by. At a drinking party with her colleagues, Hanae ends up confiding in Tanokura Yuto, a handsome young 21-year-old part timer at her company who also attends college, and who has recently broken up with his girlfriend. The next morning, she wakes up in a hotel next to him, and learns that they apparently agreed to start dating and then had sex that night. She has only hazy memories, and has no idea how to deal with the situation. Yuto is shocked that she doesn't remember, but hopes that they can still date. How will Hanae, who is older but much less experienced in romance, handle her surprising new relationship with the younger and more experienced Yuto?

27-year-old OL Kyoka has just started dating Misaki, a 20-year-old college student, and lives with him in an apartment building. Though they live in two different worlds professionally, their affection for each other can't be denied.

If you can't find your ideal prince, why not transform a guy into your ideal man? Ms. Fune has her eyes set on her dowdy boss, Mr. Ninomiya. Convinced that he'll be easy to seduce, she's shocked when he tries to convince her that there are more suitable men out there for her. She may have set the trap to catch her boss, but she ends up becoming ensnared in love herself! Will this feisty young woman be able to win an older man's heart?