Yamaguchi Kumiko is next in line to be the boss of the Kuroda Ikka yakuza clan due to her parents' death. However, fresh out of college, Kumiko decides to pursue her lifelong dream of being a teacher. Now hired as a mathematics teacher at an all-boys school, Kumiko must hide her true identity. She's assigned to class 3D, inhabited by the worst of the worst delinquents. Popularly called "Yankumi" by her students, she tries her best to gain the respect of and offer help to these students who'd like nothing more to make her life a living hell.

Story: Gokusen is a manga about a math teacher, who outside of work also happens to be grand daughter of a yakuza boss. The concept is somewhat similar to GTO, but both of those do differ quite a bit. Although the heroine faces a number of difficulties similar to those Onizuka had to face, she has a different way of dealing with them. In GTO winning over the students was prominent part of story, but in Gokusen, Yankumi (as her students had nicknamed her) gets past that part rather quick. So what is Gokusen all about you might ask? Well, it's a quite hilarious comedy. Yankumi tries really hard to hide the fact that she is from a yakuza family, yet she ends up using yakuza slang unwillingly a lot. While in front of her students she tries to play a naive and silly girl, yet sometimes she snaps and goes into "fearsome mafia women" mode. Another aspect of the story is fighting. The school Yankumi is teaching in is an all-male one, on top of that most of the students are delinquents (not that she can be bothered by it or anything). The point is, her students constantly get into trouble and kicking someones butt is usually the way to solve the problem. If it's not her students who get into trouble, then it's her. In those cases it is usually Shin (one of her students) who saves the day. Which leads us to the yet another aspect of the story. While the main theme of the manga is comedy, there is also a nicely done romance mixed with it (but more on that in the character section). Towards the end the manga things gets repetitive, but it still feels entertaining and I was very pleased with how the manga ended. Not to mention, there are also extra chapters which take place after the main series has ended. While the story in those chapters is anything but original, they are still worth reading (at least for the sake of seeing the characters once more). Art: The characters are drawn very simply and mostly as chibies (sort off). The backgrounds are not there or are very simple. Occasionally there is a close up on Shin or Shinohara in which they are drawn in bishonen style, but it's not very intense one. The general drawing style is pretty much consistant through the whole manga and while it is simple, it isn't ugly. Speaking of ugly, some of the characters are quite ugly, but they were meant to be like that. The art also gets extra points for incorporating motives from ukiyo-e paintings. Characters: Characters are a strong point of this manga. Yankumi with her lack of common sense is quite likable. However she doesn't develop much through the series. On the other hand Shin gets quite a bit of development. As the series starts Shin is a punk (albeit quite smart), he has no goal in life and hardly anything amuses him. Then he meets Yankumi who is weird and acts weird. At this point he gets fascinated with her. It eventually evolves into affection, but not before he tries to fight her or figure out her secret (you know, the one about her being from a yakuza family) out of curiosity. So later he decides to become a real man for the sake of woman he loves. Seriously, what better development can one want? It should be added that in Gokusen world Yankumi isn't considered a very attractive woman, so it would seem that poor Shin actually fell for her messed up personality and not her looks. Now that I think about it, his curiosity turned into something else around the time when she helped him solve his family trouble. As for other characters, there is also another female teacher working at the same school who happens to be a shotacon and there is Shinohara who works for Yankumi's grandfather as a lawyer. He also happens to be Yankumi's object of affection. Anyway most of the other characters do get enough of "screen time" (or maybe I should call it "page time") and they do have some contribution to the story and of course jokes, but don't develop much. Overall: I can really recommend this manga, it's really lots of fun. While some people may be put off by the student x teacher romance, it is done so well that there is hardly anything to complain about (actually Yankumi is completely oblivious to Shins feelings through most of the manga). There were however a few instances which caused my brow to rise. In one case Yankumi learns that members of her yakuza accidentally left some bad guy to his death in some forest while they were suppose to let him go. She ignores it, even though they guy is probably still alive. In another case she enters a room in her house and finds a member of her yakuza beating some guy. She catches a friendly chat with the yakuza member and exits the room like nothing happened. The last "offending" part was when an owner of a big shop chain was hiring high school students. *SPOILER* He was willing to hire only one person so he made a test for those students. It consisted of many weird and obscure tasks, but the last part was a visit to soapland (a brothel). *SPOILER* I understand that all those were suppose to be a jokes, but it still felt out of place (in compare to the rest of the manga). There isn't much else to add. Go read it :D 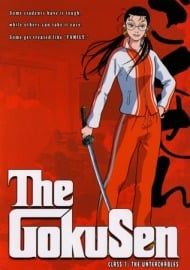