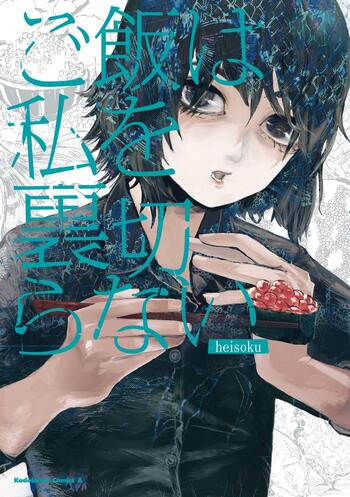 If you're looking for manga similar to Gohan wa Watashi wo Uragiranai, you might like these titles.

Yamada, Bun is a shy, quite, keep to herself kinda girl but when it comes to cooking she gets really into it and is an awesome cook. She lives alone with a talking stuffed animal named Hokusai but only she can hear him speak. Bun is fine with her life as long as she has her food and Hokusai.

Both are slice-of-life food-centric manga with female protagonists and slightly bizarre art styles. Each series' protagonist has a different relationship with food. Bun-chan from Meal with Hokusai is an introverted but vibrant college freshman whose happiest moments are when she's cooking. GohanUra's unnamed protagonist is a older woman who uses food as a means to switch off from the world and immerse herself in some exhaustion-induced delirium.

Harumi may be finished with graduate school, but he’s 31, unemployed, and not exactly living the dream! But when a beloved aunt passes away and leaves him in charge of his striking young cousin Kururi, Harumi suddenly feels his dull, depressing days take on an exciting new flavor…Takasugi-san’s Obento serves up bittersweet memories and savory surprises in a perfectly-presented feast! Can a hapless post-grad help a severely shy junior chef come out of her shell? And will the unlikely duo learn to both cook and live in sweet harmony?

Mariko is a 28-year-old woman living in Tokyo with her boyfriend of seven years. Mariko becomes disillusioned with her slovenly boyfriend's lifestyle and breaks up with him to get a new start. She fondly remembers the wonderful breakfasts she had in her family growing up, and she decides to start a new lifestyle by visiting different (real-life) places for breakfast every morning. The places she visits range from Good Morning Café to the small Japanese-style restaurant Katō in Tsukiji Fish Market, to bakeries like Le Pain Quotidien.