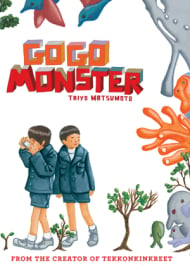 Third grader Yuki Tachibana lives in two worlds. In one world, he is a loner ridiculed by his classmates and reprimanded by his teachers for telling stories of supernatural beings that only he can see. In the other world, the supernatural beings vie for power with malevolent spirits who bring chaos into the school, the students' lives, and nature itself.

351 users are tracking this. Log in to see stats.

This is beautiful. Well, not necessarily the artwork, but the conception and vibes. As I continued reading, I became more and more impressed with the manga and the way that it got me hooked without having very much of anything going on. It somehow has both a laidback and a tense feel to it. The events within could easily be interpreted purely as a portayal of childish imagination, perhaps amplified with a hint of schizophrenia or other mental illness. But it's left open-ended enough that it could also easily be interpreted as a portrayal of the interaction between the Other Side and this one, and how there are some children who are capable of sensing the spiritual forces that are affecting the world around them. Yuki is isolated and shunned by most everyone in feir school, because fe's a weirdee creepazoid who talks about nonsensical things (like the Other Side, or Super Star or the teacher's face being upside down) as though they were real. There are only three people who interact with Yuki in any sort of genial manner: Makoto, IQ, and Mr. Ganz. Makoto has a constant squiggle-blush and, while a bit off-put by Yuki's mannerisms, becomes Yuki's only friend at the school. IQ is a fellow weirdo in a way, wearing a cardboard box over feir head and being also being shunned by the rest of the school. IQ has a strong emotional attachment to the rabbits, and Yuki seems to have a strong attachment to flowers and other plantlife, having learned it from Mr. Ganz. Mr. Ganz is the school groundskeeper or gardener or something, and fe's probably my favorite character--both because of feir zipper-like mouth and because of how fe treats Yuki with kindness and non-rejection. Over the course of a school year, we see a slow downward spiral as things start to feel more chaotic or tense and Yuki starts to see more and more trippy things. Among other techniques, the arist uses repeated panels, cyclical events, to create a sense of psychedelia and detachment from reality. Among other things, the author uses repeated panels, cyclical events, to create a sense of psychedelia and detachment from reality. Messing with temporal stability. There are also talking animals, cryptic phrases, flowers in the sky, spatial distortions, and other oddness. Airplanes fly overhead. Water droplets drip slowly, sometimes with faces in them. Chapter four is the climax. The obscured, shadowed drawings within this chapter are awesome. As is the way the harmonica is shown as breaking through and the way that sequentiality goes haywire and I have little concrete idea of what's going on, but I still gots the beautiful vibes.

Gogo Monster is not for readers who want to close a book and understand exactly what just happened. It is often intentionally vague in execution, leaving the reader wondering about Yuki's mental state. Despite the book being rated safe for 13+ readers, I feel older teens and young adults will actually appreciate it the most for its commentary on the struggle to maintain a child-like sense of wonder as we grow up.