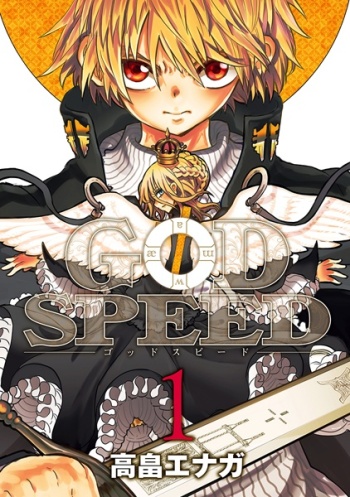 Once, male angels known as the saint beasts protected both heaven and earth. Two rebelled and were cast down; now only four remain to fight heaven's new enemy. With the goddess on their side, and the powers of the dragon's sword, the turtle's shield, the phoenix's dart and the tiger's armor, the saint beasts appear invincible. But the goddess asks much more of them than vanquishing their enemies. Not only must they protect humans and guardian angels, rein in wandering angels and cook tasty meals, but in the final battle, they must also face those whom they hold most dear.

Long ago there was a war in Heaven which resulted in Judas and Luca – two of the six specially-chosen, talented and strong Saint Beasts – being cast out and imprisoned in Hell for leading the rebellion. But before that Heaven had been a peaceful place where the angels happily lived their lives. In this time, Judas, Luca, Goh, Shin, Rey and Gai are adolescent angels in Heaven who, on the day of Benediction, are made into adults by the supreme god Zeus. With each of the six having their own special abilities and new adult bodies to get used to, opportunities to meet each other arise and new friendships are formed.

Ringarindo is a land surrounded by a wall. The wall covers, protects, cultivates, and nutures this land. The wall is god ... it is the foundation of this land of Ringarindo. One day, a mysterious man named Back Arrow appears in Essha village on the outskirts of Ringarindo. Arrow lost his memories, but says that all he knows is, "I came from beyond the wall." To restore his memories, Arrow heads out beyond the wall, but is embroiled in a battle with himself as the stakes.

The angel Phoenix stands up to a mad Zeus who wants to spread darkness over the world. With the help of his friends, Phoenix goes in search for magical lithographs to prevent the resurrection of the most terrible monsters of all times; the Zaikroids.

Reborn as a woman named Aiko, the soldier rises as the military leader of a new crusade, successfully unites the world and abolishes all religion. Haunted by memories of a past life, Aiko travels backwards in time, and finds herself caught in an incredible battle to save the future.

Meet Laharl, prince of the Netherworld - a place where battles rage, even at the cost of crumbling buildings into dust. With Etna attempting to wake the young demon lord from his slumber through all manner of methods, an assassin angel from heaven endeavoring to claim the spotlight and mid-level bosses trying to gain more notoriety than they deserve, the Netherworld has never been so busy.