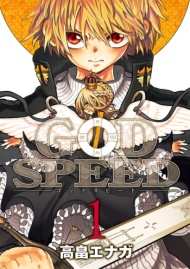 508 users are tracking this. Log in to see stats.

Godspeed’s setup sees a group of children are raised within protective walls, but seek to understand the world beyond them. Once they reach a certain age, they “graduate” and may “ascend to paradise”. Those who ascend are never seen again, and it’s likely this ritual, and the angels who care for the children, are far more sinister than they appear. This concept is not wholly unique, fans of the Promised Neverland will find this plot hook is familiar. While The Promised Neverland released after Godspeed, I find it executed this concept more successfully. Despite Godspeed’s weaker story and characterization, it isn’t without merit. The manga has some incredible artwork, particularly in its fight scenes and horror concepts, and it is a short read. So, if the concept of a story similar to The Promised Neverland, but with far more action, a faster pace, and an aesthetic based on angels and demons interests you, I’d recommend giving it a try.  If you’d like my full thoughts on the manga itself, read on for further detail. I will keep story spoilers to an absolute minimum. Story(4/10): As stated in the opening, Godspeed has a fascinating, if not wholly unique concept. This iteration of a walled city sheltering children from a dark, mysterious world does have strong aesthetic sensibilities, and it had the potential for strong, unique worldbuilding.  However, much of the manga’s story, worldbuilding, and character development suffer from the story’s pacing, which is far, far too fast, particularly towards the end. The rush glosses over potentially deep and interesting concepts such as the nature of the creator of the world and the relationships between angels, demons, and the protagonist. A longer run with a slightly slower pace and more stops between the starting point and destination would have greatly improved the world building and characterization, more on that later. Art(9/10): The art in this manga is certainly the highlight. The world is rich with unexplored detail, the angel designs are varied and creative, and the action and horror scenes are a delight! The action in particular is creative, energetic, and richly detailed, so any lovers of beautiful manga fight scenes are in for a visual treat. While the character designs are overall varied and beautiful, I find some are a bit busy. The overall panel structure is improved from Enaga Takabatake’s earlier works, making the action and story beats significantly easier to follow. Characters(5/10): The characters themselves aren’t particularly bad, but there is so much missed potential here.  This is again, in part, due to the fast pace of the manga, though the weak dialogue does little to help. Characters like Aqua, Oliver, and especially Amalda suffer from rushed character arcs. This leaves them feeling as if they suddenly altered themselves because the plot demanded it, rather than due to personal growth over time.  This fast pace also leaves many characters in the dust. For example: several of the protagonist’s friends are built up in the first chapter, but play no role in the larger plot, and the identity and persona of the “creator” are never well explored. This leaves the series with even more unexplored potential. Additionally, though the world building is interesting, the dialogue is far less so. That only served to exacerbate the lacking character development. Overall, while the characters have good concepts and the potential to be interesting, they are let down by poor pacing and meh dialogue. Overall(6/10): Godspeed is a manga with gorgeous art and a rushed story, leaving it with far more style than substance. Overall, in spite of its flaws, I do urge those who are interested to give this manga a try. If it’s your cup of tea, I do think it will serve as a quick, enjoyable read. This story would have benefited from a significantly longer run, though it will sadly never be expanded on, following the tragic death of the author in 2017. I sincerely hope Enaga Takabatake rests in peace.

Godspeed is a beautiful story the characters and art were great the story itself was perfect I really enjoyed it. it's such ashame that the author passed but I think this book is interesting and I hope many others enjoyed this as much as me

A surprisingly dense and fast-paced work that gets a lot across in a small number of chapters. It's not quite my cup of tea, so to speak, but I respect the author's work. I might've liked it more if I were in a different mindset or demographic. Story - A micro-society of children live in "Sanctuary" until they reach the age of 14 and graduate, wherein they are allowed to leave and enter "Paradise". These children are watched over by a group of Angels who warn them that Sanctuary is for their safety, as Demons exist outside the walls and specifically seek after these children. One day our Main Character manages to find a key and a secret exit, and forever changes his life... Honestly, I actually quite liked the introduction to this story, and in many ways I wish the author had lingered a little longer on the subject to help us connect with the MC and some of the side characters before diving straight into the main tale. There are a number of developments in this story that made me raise an eyebrow, but overall I find its construction satisfactory. The main/only major complaint I have is how rushed everything feels - frankly this story is a bit too much to tell in only 10 chapters, so I never really felt the dramatic weight of anything, nor felt connected to any of the characters. And, ultimately, as I mentioned above, this story doesn't quite resonate with me like it might for others. 6/10; Not bad, but I didn't enjoy it as much as I'd have liked Art - A fair amount of skill is on display here, and I find the compositions and designs to be very competent and solid. The backgrounds are simply amazing, and while I don't particularly care for the art style used on the characters, they have a fair amount of detail in them. 8/10; Well above average, but not quite my preferred style. Characters - As I mentioned with the story category, it's hard to get invested in any of these characters with how little time we actually get to see them. There are some amazing development moments where a character has a realization or emotional outburst, but the weight of them never really sinks in because there wasn't enough lead-in. Again, totally competent writing and development frameworks here, just lacking the extra fleshing-out needed to really shine. 7/10; Needed more exploration Overall - Honestly I think all this needed was a little more time to explore its concepts. The framework is solid and the writing/artistry is there, it just all feels a bit rushed. 7/10; It's not quite what I was looking for, but I totally respect it.